In 2010, the Russian film archive Gosfilmofond in Moscow began the repatriation of over 200 American-made silent films to the Library of Congress. One of the 235 silent films on this list is “Three Weeks” (1924), directed by Alan Crosland, starring Aileen Pringle and a very young Tom Tyler, who was billed as Bill Burns. What makes this copy of “Three Weeks” so special is that it remains the only surviving complete print of the movie, at a total of eight 35mm reels. “Three Weeks” is the only surviving silent film Tom Tyler appeared in during his earliest year in the film industry, 1924.


If “Three Weeks” is eventually repatriated to the United States it will be in digitized format, which will be a bonus, especially if the Library of Congress decides to allow a distributor to finally make the movie available. Gosfilmofind presently offers copies of “Three Weeks” at $35.00 per reel, making the total for all 8 reels rather costly for a movie that runs 80 minutes long. Unfortunately, this present project between Gosfilmofond and the LOC has been put on hold, but hopefully will be resumed in the near future.

Also in the Gosfilmofond archive are "Lightning Lariats" (extant), and "The Avenging Rider" (1 reel). It remains unknown if these two Tom Tyler silent films will be repatriated along with “Three Weeks” and the other silent films on the list but hopefully they eventually will be. 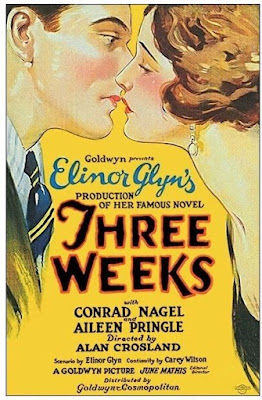 Posted by TriggerTom at 9:44 AM