One of the best known cinematographers for RKO – and its earlier incarnation of FBO – is Nick Musuraca. Born in Riace, Calabria, Italy on October 25, 1892, he immigrated to the United States in 1907. Nick got his start in Hollywood as a chauffeur to silent film producer and director J. Stuart Blackton. It was not long before his talent with camera lighting was noticed by Blackton, who signed Nick on as cinematographer for one of his production company’s silent films, “The Virgin Queen”, 1923. Soon after, Nick did “On the Banks of the Wabash” for Vitagraph, an elaborate production as it involved shooting on a full-sized riverboat steamboat on location, Manhasset Bay, Long Island, New York. However, Nick’s career at Vitagraph was short lived, for soon after the making of this silent film, Vitagraph was purchased by Warner Brothers. The good news is, since Blackton had connections with Vitagraph, and continued to play a directorial role with Warner Brothers, bringing along Nick for a bunch of silent films, which included stars like Tyrone Power Sr., Myrna Loy, May McAvoy, and Louise Fazenda. In 1926, Nick Musuraca was cinematographer for a small production company, B.P. Schulberg Productions, making one movie for them, “His New York Wife” starring Alice Day. The turning point of Nick’s career came when Joseph Kennedy Sr. signed him on as a regular cinematographer for FBO pictures, maintaining that position when FBO transitioned to RKO in 1928, and throughout the 1940’s, working behind the camera for everything from westerns to dramas, noir, horror and comedies.

So where exactly does Tom Tyler fit in here? Actually, it is more of a case where Nick Musuraca fits in here. Once Nick signed that contract with FBO, his first assignment was being cinematographer of “Lightning Lariats”, a 1927 silent film western starring Tom Tyler. Naturally Tom and his pals gave Nick a very warm welcome. The two men worked together well, as Tom was always an agreeable actor and loved his work. In 1927, Nick and Tom worked together on: “The Cherokee Kid”, “Tom's Gang “, “Splitting the Breeze”, and “The Sonora Kid”; in 1928, “Tyrant of Red Gulch”, “When the Law Rides”, “Terror Mountain”, “The Avenging Rider”, and “Phantom of the Range”; in 1929, “Trail of the Horse Thieves”, “Gun Law”, “The Pride of Pawnee”, and “Idaho Red”.  However, 1929 was not the last year Nick and Tom would work together, even though for almost two decades they worked for two different studios. In 1948, Tom snagged a minor role in the memorable Robert Mitchum western noir film, “Blood on the Moon”. Nick Musuraca was the director of photography, working his magic with lighting and the camera. In one scene with Tom Tyler inside a building, everything is dark, with the exception of lighting upon Tom’s face, and ceiling partitions. Meant to build up the drama, Tom eventually gets plugged, falling away backwards into darkness.


“Life is a shadow that flits away
In a night of darkness and woe."
- H. C. Andersen

Critically acclaimed even though it did not garner any Oscar nominations, “Blood on the Moon” is one of the best of its genre, and included many western stars besides Tom Tyler: Walter Brennan, Tom Keene, Harry Carey Jr., Ben Corbett, and Bud Osborne.

Nick Musuraca was nominated for an Oscar in cinematography for his work in “I Remember Mama”, a 1948 movie starring Irene Dunne, Barbara Bel Geddes, and Oskar Homolka, about an immigrant family from Norway living in San Francisco in the year 1910. He continued to work in film for RKO until 1954, when he switched to working in television. As director of photography, shows he worked on include: “The Life of Riley”, “The Lone Wolf”, “Four Star Playhouse”, “The Lucy Show”, and “F Troop”.  In addition to “Blood on the Moon” and “I Remember Mama”, Nick Musuraca’s work really shown in the Val Lewton produced movie “The Black Cat” (1942).  Starring Simone Simon, “The Cat People” was a box office smash for RKO in 1942 but also set a standard for the use of shadows in lieu of an actual monster in horror movies.

Nick Musuraca died on September 3, 1975 at the age of 82 while living in Los Angeles. He wife was Josephine, and together they had three children: Nicholas Jr., Ann Marie, and Mary Jo. Nick was a Member of the American Society of Cinematographers (ASC), and with well over 200 credits under his belt, had a rich and varied career in Hollywood dating back to the silent film era.


Posted by TriggerTom at 2:43 PM No comments:

Tom Tyler in The Talk of the Town 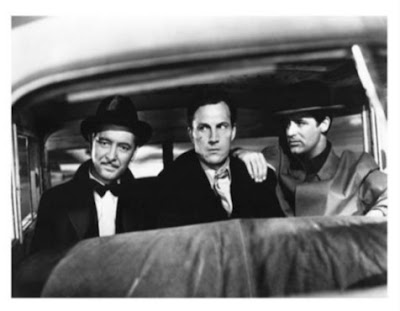 Taking a break from making Three Mesquiteers movies for Republic Pictures in the early 1940’s, Tom Tyler took on a few supporting dramatic roles for major studio movies, notably, one with Columbia Pictures and a former co-star from his silent film days with FBO, Jean Arthur. Tom just finished making “The Phantom Plainsmen” in 1942 when the director for “The Talk of the Town”, George Stevens, approached him and asked if the famous cowboy would be interested in playing a heavy in a romantic comedy which also starred Cary Grant and the well-known British actor, Ronald Colman. Playing the role of Clyde Bracken, a foreman at Holmes Mills who is suspected of being killed in a devastating fire at the factory started by Leopold Dilg (Cary Grant), Tom makes his appearance about three-quarters of the way into the movie when his character is discovered to have survived the fire. Nabbed by Nora (Jean Arthur), Dilg and Professor Lightcap (Ronald Colman) at the post office in Boston, Clyde gets into a fightfight with the two men, eventually forced into the car with the trio and back to Nora’s house in Lochester, Massachusetts. During the drive Clyde is steely eyed and silent, refusing to give out any information that might get Dilg off the hook. Being somewhat of a pro with the steely eyed look, Tom’s heavy is an appreciated diversion from the friendly smile of Stoney Brooke, a sign of true diversity in acting. 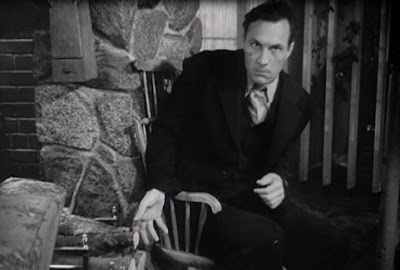 At Nora’s house, Clyde collapses in a chair by the fireplace while Lightcap places a phone call to the police. Wearing a grim expression, Clyde picks up a log by the fireplace and brings it over Lightcap’s head – and Dilg’s head as well -  and escapes. The fact that Tom’s character is indifferent to seeing Dilg being lynched by a whole town whose citizens lost their jobs at the mill is nothing short of disturbing. After all, Clyde could have stayed in hiding in Boston for good, had not one piece of evidence from Regina Bush (Glenda Farrell), a beauty salon owner who gave Lightcap a manicure, slip into his hand from hers during a dance date. Given refuge by Regina, Clyde hides out at the salon until Lightcap roots him out and hauls him into court to confess who was really responsible for the factory arson – and it was not Dilg. Sitting in the witness box, Clyde still wears that indifferent, apathetic expression, playing the role to perfection. It is clear Tom Tyler knows what emotions to convey in demanding scenes like this; compare this performance to his expressions in “Stagecoach”, despite being a western, Tom’s character of Luke Plummer is dramatic in the literal sense of the word. According to an article in Oakland Tribune, Oakland, CA, December 6, 1942, Tom Tyler admitted to not having any qualms about playing roles in non-westerns like “The Talk of the Town” even if they are minor but important roles, as they give him a chance to hone his acting skills. For Tom, it must also have been a delight to work once again with a leading lady from his silent films days: Jean Arthur appeared in both “Born to Battle” and “The Cowboy Cop”, from 1926.

One fun piece of trivia about “The Talk of the Town”: William Benedict, who played Whitey in “Adventures of Captain Marvel”, has an uncredited role as a Western Union boy.

Posted by TriggerTom at 7:41 PM No comments:

In May of 2017 I wrote an article on the Los Films del Far West Spain-published film booklet series as a collectible. One unusual quirk of these film booklets, at least the ones based on Tom Tyler’s silent films for FBO, is that the film still on the cover did not always match the title of the movie; to make matter worse, sometimes a film still from a third movie might creep into the inside of the booklet, nestled among the text. There are a total of 34 issues in this set, thirteen of them based on Tom Tyler’s silent films. Below are the issue numbers and their English translations:

Posted by TriggerTom at 3:18 PM No comments: