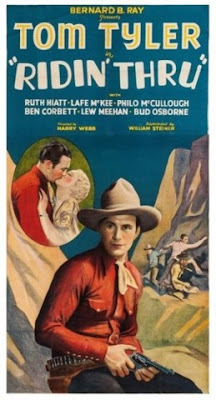 Up until November 30, 2017, “Ridin' Thru” was previously only offered through Sinister Cinema when Alpha Video released it on DVD as part of a double feature also includes “The Fighting Trooper” (1934) starring Kermit Maynard, the brother of western actor Ken Maynard. While it is always nice to see a competitive source offer the same movie, what differentiates the Alpha Video version is that it was made from a brown-tinted print of the movie.

Tom Tyler is Tom Saunders, an itinerant cowboy whose trail partner is Ben (Ben Corbett), traveling on their way to their next job at Elmer “Dad” Brooks (Lafe McKee) ranch. Brooks' ranch is in financial trouble and while he would like to sell some of his horses to pay the bills, he can't because his livestock is being stolen out from under his nose. The movie opens with a magnificent white stallion nodding his head as he stands upon a cliff, as he does at several points throughout the film, perhaps more as an acknowledgement of his handsomeness rather than as a sign he is a horse thief. When Tom and Ben arrive at the ranch they discover it has been transformed into a dude ranch so that Brooks could make some money to pay his bills. Once they get hired for the job by an unrelenting foreman by the name of Winthrop (Philo McCullough), Tom and Ben discover what has been happening with the horses – and are requested by Brooks to find out who is behind the entire operation. While Tom is providing the brainpower to trap the horse thieves, he falls in love with Dolores (Ruth Hiatt), the niece of “Dad” Brooks. 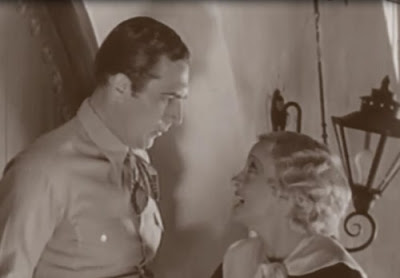 There is no shortage of friction between Tom and Dolores when they first meet, which continues throughout the story. The first time is when she is having a picnic with a friend named Myra and Tom decides to move her car away from where it was parked; next, when Tom exits her house and spills a drink she was carrying on a tray right onto her dress. Dolores never loses a moment to make a disparaging remark at Tom: calling him a chump, a big ninny, then eventually thinking he really is dumb, and finds Tom to be too far beneath her. Yet the chump comment occurs during one of the funnier moments of the film; Dolores asks Tom to help her onto her horse, and he does, placing his hand on her behind as he lifts her into the saddle. Regardless of how Dolores treats Tom, he is still the perfect gentleman, even rescuing her when she is on horseback and her horse suddenly sees the white stallion and takes off after it. Tom swoops her up in his big strong right arm while on his own horse and gently sets her down on the ground before fetching some water from a nearby creek to splash on her. By then though Dolores is gone, having left with Winthrop, who she thinks was the man who rescued her. 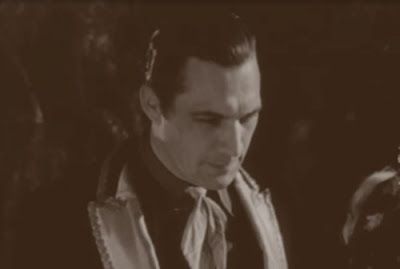 Despite the way Tom feels, he cannot help but wonder why she even bothers with him; for instance, dancing with him at a costumed ball on the ranch which all of the guests attend. She acknowledges Tom's aid in tracking down the horse thieves for her uncle, but has no emotional connection with Tom. He would like to be more than just friends with her but even at that level he fails. Dolores relents though, and when Tom honestly tells her that she is a peach, not a pill, her hopes are raised if only but a notch. 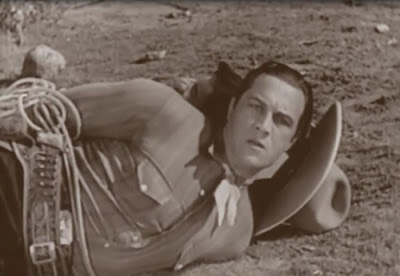 Hot on the trail of closing in on the horse thieves, Tom and Ben find themselves framed by Winthrop, captured, and tied up on a remote part of the ranch. Blackie, Tom's horse, chews through the ropes binding them like the smart horse that he is, freeing Tom. As soon as three of the culprits appear from beyond a barn Tom fistfights them – all three men at once. Tom finally gets a confession from Winthrop, and with the case wrapped up, gets ready to leave the ranch with his pal Ben. Before they part, Dolores executes a perfect Mae West imitation, even looking like her, as she asks Tom “Why don't you come back and see me sometime”. At that point Tom and Dolores have finally made up, as they exchange a kiss. 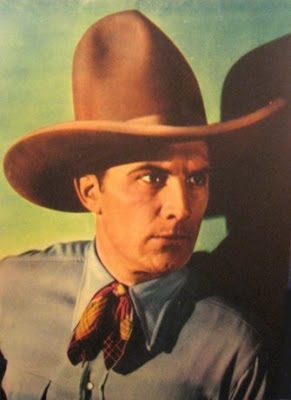 Like Tom Tyler, Ruth Hiatt was also a former silent film actress born in 1906, three years after Tom, and is on a par with his acting talent and looks. Bud Osborne plays the sheriff, another alumni of Tom's films which date back to his late silent films such as “Call of the Desert” (1930). Directed by Harry S Webb (as Henri Samuels), the written story is credited to actress Carol Shandrew (she played a role in Tom's film “Tracy Rides” as the daughter of a sheep herder) and Rose Gordon even though the plot has been recycled from an earlier film, “The Phantom of the Desert” (1930) starring Jack Perrin. It is possible that these two ladies names were credited due to a studio quota at the time. The stallion closely resembles the one who starred in “Coyote Trails” (1935), another Tom Tyler film. The western scenery is beautiful, and “Ridin' Thru” was popular enough to warrant a full-color portrait of Tom as he looked and dressed in this movie in exchange for a dozen Dixie cup lids.

With Alpha Video still issuing Tom Tyler films, they seem to be the most likely DVD distributor to issue any further movies of his that continue to be found. 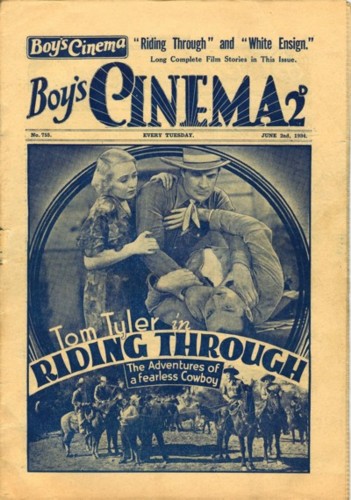 Posted by TriggerTom at 3:18 PM No comments: 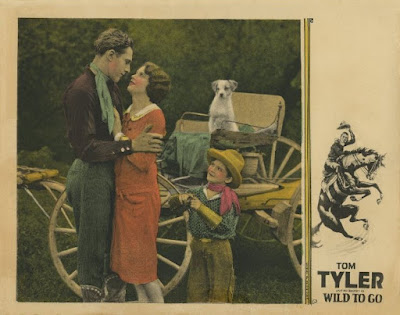 One of the most commonly asked questions of a Hollywood celebrity in an interview is their favorite movie filmed, plus their general attitudes about their own work. Tom Tyler loved his work and obviously loved all the roles he played, no matter what movie it was, whether it was a starring role or supporting role. It is perhaps for that reason why it has been difficult to find any information that answers the above question, as there are no extensive interviews with Tom Tyler in the papers. However, there are a few early sources that might hint at which movies he thought were his very best, ones which he favored the most.

For example, Tom claims that “Wild to Go” was one of his best movies, if only for the fact he got to enjoy the company of many pretty young girls and not just one leading lady (it should be remembered that Tom was much closer to his two sisters Katherine and Molly in real life than he was to his two brothers), and it is safe to say he felt comfortable enough around women yet not be a “ladies man” type. Considering how Tom phrased it, maybe “Wild to Go” was also a personal favorite of his, and luckily, this is one of his silent films made for FBO which has survived and is housed at Cinematek in Brussels, Belgium.

It is yet unknown if Tom particularly favored his critically acclaimed role in “Stagecoach”, or even as the comic book superheroes Captain Marvel or The Phantom. If he did, he was probably a little quiet about it, either out of his shyness, or maybe even modesty, for he was no braggart in Hollywood. Tom knew he was physically very strong, capable of many feats as the film scripts demanded, just as well as having the talent to turn in a top-notch performance, no matter what type of role he was in.

Posted by TriggerTom at 12:27 PM No comments:

For the person newly introduced to Tom Tyler's work in westerns of the 1930's which are plentiful on the market, the majority of his film character names remains the same as his adopted one – Tom. Having come a long way from being Vincent Markowski, Tom Tyler probably never dreamed he would be a big enough Hollywood icon to go by his first name alone in the many movies he made. Since his professional name was tailored after the silent film star Tom Mix to some degree – many of Mix's screen characters were also named Tom – one other feature both Tom Tyler and Tom Mix share is this: their earliest character names were completely different from their own, with a few exceptions. Tom Mix had the character name of Tom in a number of silent film shorts in the early 1910's, such as “The Telltale Knife” (1911) and “The Scapegoat” (1912). In a way this naming practice set the standard for new silent film western stars, such as Hoot Gibson, Buck Jones, and Tom Tyler.

Once he was selected as the new western star for FBO, his first starring role being “Let's Go Gallagher”, Tom Tyler appeared onscreen as Tom Gallagher, a hard-fighting youth who finds himself caught in a whirlwind of adventure. Such a memorable debut caught the public's eye quickly enough, for soon Tom appeared in successive movies bearing character names such as Phil Stone (The Wyoming Wildcat), Dennis Terhune (Born to Battle 1926), Dandy Carrell (The Arizona Streak) and Jerry McGill (The Cowboy Cop). For the rest of the year 1926 and into 1927, Tom's onscreen names were always Tom but a different, simple last name, and by the time he finished his contract with FBO, sixteen of the silent films he starred in had the character name of Tom. Surprisingly enough, none of the eight movies Tom made for Syndicate directed by J. P. McGowan had character names of Tom; each one was totally different, such as Rex Carson in “Call of the Desert.”

Unlike Tom Mix, who made eleven movies in the 1930's, Tom Tyler made 47 movies during that decade where he had the starring role, already long established as an icon himself. For it did not matter if any one of his given movies saw him as Tom or some other name in the story. Tom Tyler was a highly recognizable star on the silver screen, if not for his distinctive looks and voice, for his low-key persona which made him a true favorite of many an American family.