The Hero in the Role of a Patient

Among the most poignant scenes in Tom Tyler’s movies are those where he is being attended to by a woman (usually a young and pretty one) nursing him back to health when his character is injured in some manner. These story aspects inject vulnerability into the virile, strong and handsome heroes Tom is known for portraying but also provide a glimpse into his real life health issues aside from his battle with scleroderma. For example, he had a serious cold which held up filming “The Sonora Kid” (1927); his second major illness was dealing with the flu while filming “Clancy of the Mounted” (1933). This article will explore Tom’s heroes in the role of patient in “Call of the Desert”, “Galloping Thru”, “The Forty Niners”, and “She Wore a Yellow Ribbon”.

In “Call of the Desert,” Tom is Rex Carson, a prospector seeking his father’s claim but his companion Tod Walker (Bud Osborne) absconds with the map which depicts the location of the claim. Once Tod feigns illness, forcing Tom to carry him during a good portion of the trip, the two men fight on the snowy ground. Tod absconds with the map and ends up deserting Rex. Rex has to walk by himself through the cold wintry desert, eventually falling ill before he collapses in the snow. Here, a cowboy named Hardrock (Bobby Dunn) has made camp under a large tree where the snowline ends, and takes Rex in, eventually traveling towards the ranch lands in order to get medical help. With Rex slung across a horse’s back, Hardrock and two men arrive at the Walker Ranch – and is nursed back to
health by Jean Walker (Sheila Le Gay), the nominal owner of the ranch. Rex is removed from the horse by the two men, gently laid on the ground, his eyes closed, looking angelic with his delicate brows as Jean looks at his face romantically. She directs the two men to carry him inside and lay him on the bed in the guest room, instructing one of them to get some medicine from the cabinet in the kitchen. Jean personally administers the medicine to Rex, as he lay on the bed, eyes still closed but lips slightly open. She gently props Rex’s head so that he could take the medicine with some water without choking. Jean looks lovingly into Rex’s face when he starts to recover, his eyes opening wide. She becomes totally enchanted with him at this point, his clear brown eyes softening, smiling as she leaves him with his pal Hardrock and lets him sleep so that he gets well quickly. At this point it should be remembered that as Tom Tyler was entering his last stage with scleroderma, he went home to Hamtramck, Michigan, to live with his sister Katherine, who gave him hospice. No man is too brave or strong to endure illness, temporary or permanent, to not seek the gentle and empathetic healing touch from a woman.

It is not always illness that has Tom receiving medical attention from someone he deeply cares for. In “Galloping Thru” (1931), Tom McGuire is wounded by a gang of outlaws, abandoned on a trail – the same outlaws who shot his father dead. When his body is found by a friend, Sandy Thompson (Al Bridge), Tom is taken to the home of Janice Warren (Betty Mack) who along with Sandy provides him with medical attention so that he can recover and get back on his feet to hunt down the outlaws responsible for his father’s death. “Galloping Thru” remains a lost film although film stills and lobby cards exist showing Tom being in bed, covered by white sheets and given medication by Betty Mack while he is smiling, his face expressing content, knowing that he will in fact be in top health once again.

Tom becomes a shooting victim once again in “The Forty Niners” (1932). Tennessee Matthews is on a journey with a group of friends who are headed to California to cash in on the gold fever. Unlike the previous movie, however, Tennessee is given aid in the back of a covered wagon, tended to by Widow Spriggs (Fern Emmett), a woman old enough to be his mother, adding the maternal touch to his recovery. Leaning back comfortably with his shirt off, against pillows and protected with mosquito netting, Tennessee awakens after the primitive surgery to remove the bullet from his shoulder, and sees Widow Spriggs sitting next to him. Conscious of being bare on top in front of her, Tennessee asks her where his shirt is. Thinking that he might be seeking the rose that Virginia (Betty Mack) gave him from her rosebush, the widow tells him that the flower has fallen apart, leading to a certain disappointment in Tennessee’s face – as Virginia is his romantic interest. In reality, Tennessee has not lost Virginia’s love, despite the fact O’Hara (Al Bridge) has tried to claim her for his own.

Speaking of a maternal figure nursing Tom Tyler, the theme is repeated again in “She Wore a Yellow Ribbon” (1949) where his character, Corporal Mike Quayne, is injured by a marauding band of Indians as Captain Nathan Brittles (John Wayne) leads his final army patrol out west to counterattack them. Once Mike is laid up in the covered wagon, prepped for surgery, Abby Allshard (Mildred Natwick), the wife of Major Mac Allshard (George O’Brien), is the trained nurse, sitting by his side. She pours a glass of whiskey for Mike to imbibe in order to deaden the pain before Dr. O'Laughlin (Arthur Shields) removes the bullet from his chest. After a brief rousing of the cavalry song between Abby and Mike, he falls unconscious while the doctor quickly does his task before bandaging up the patient. Abby remains by Mike’s side during the entire time, which transpires during the covered wagon on the western trail during a major thunderstorm. It is difficult to imagine a troop of men on a dangerous mission without having a doctor and nurse present, and the covered wagon surgery scene is in fact the most memorable one in the movie. Even though Tom Tyler is not the leading man hero in this movie – that title is reserved for John Wayne – he is the first hero who falls victim to the Indian attacks and recovers. A previous blog article mentioning this event is located here in further depth.

The global reach of “Adventures of Captain Marvel”

Outside of a few restrictions during 1941 to 1945 – the time span which “Adventures of Captain Marvel” hit the global market – the film serial was earnestly accepted and shown by film exhibitors in  countries most of us would not immediately think of. With thanks to film collectibles websites, along with foreign newspaper archives, mentions of “Adventures of Captain Marvel” have popped up from some surprising countries. One sheet posters of this film serial were manufactured in faraway places like Turkey, Pakistan, and India. Newspaper cinema ads for “Adventures of Captain Marvel” appeared in Indonesia, Iceland, and what was then called Malaya (Malaysia), sometimes as late as 1950. For the majority of these cinema ads they either retained their American English title, or became simply Captain Marvel. Even the re-release of the serial under the title “Return of Captain Marvel” made its way around the globe. Colorful, imaginative lobby cards bearing the title “El Regreso del Capitan Maravilla” were released in Mexico, many of them later making their way into the American market as prized film collectibles.

Following is a partial list of other nations where “Adventures of Captain Marvel” was seen during its first run in movie theatres:


Posted by TriggerTom at 3:52 PM No comments: 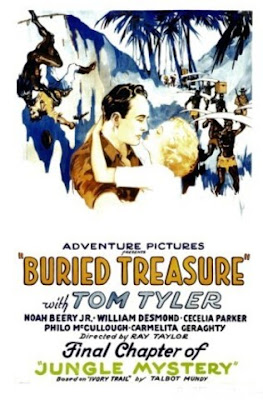 March 3, 2019 marks the launch of a new film petition: “Jungle Mystery” (1932) starring Tom Tyler and Cecilia Parker. It has been four years since Universal Pictures preservation department restored this 12 chapter serial plus the 75 minute long feature cutdown. 2019 is the perfect year for “Jungle Mystery” to make it to DVD, what with last year’s "Adventures of Captain Marvel" (1941) Blu-ray release by Kino, and additional resurfaced “lost films” of Tom Tyler within that short length of time. Four years does not seem that long but it has been an exciting journey in rediscovering these movies. Aventuras de Tom Tyler is all about the celebration of Tom Tyler and rediscovering his lost films, because he is worth it, and the time has come for movies like “Jungle Mystery” to be seen by the public all over the world.

A huge thank you to everyone who signs this petition. Please share this petition link with as many people as you know, in film groups, film forums you are a member of, and we can get this done.

Posted by TriggerTom at 10:25 AM No comments: