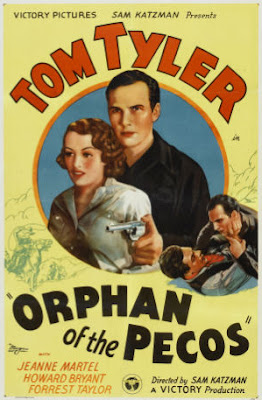 Tom Tyler was married for about five years to actress Jeanne Martel, who was also a B-film star. Although she was twelve years younger than Tom, the age difference did not keep them from getting to know one another and eventually marrying. At the age of 33, Tom probably felt it was time for him to settle down, despite the fact he did not lead a “swinging bachelor” lifestyle. In fact, his only other publicly known love interest was in Ethlyn Clair, who starred with Tom in “Gun Law” and “The Pride of Pawnee”, both in 1929. Yet nothing came of that relationship, so far as we know, which meant that Tom simply did not yet find the right woman for him.

Tom met his wife-to-be on the set of “Santa Fe Bound” in 1936. The newly met couple spent the usual amount of time getting to know each other, including time spent with their families, and married on September 3, 1937. Tom and Jean made two more movies together, “Lost Ranch” and “Orphan of the Pecos”, both in 1937 before they signed up to perform with the Wallace Brothers Circus for a year. In the 1930's, spending one's honeymoon while circus touring must have been uniquely romantic, not to mention the hard work involved with touring by train. Eventually, however, Tom and Jeanne divorced sometime around 1945. Below are photos of Tom getting into an airplane on the way to the wedding, plus an actual wedding day photo. He certainly looks handsome in a tuxedo, and Jean looks lovely in her bridal dress. It goes without saying they were one of the best looking couples in Hollywood in the 1930's.


Posted by TriggerTom at 9:59 AM No comments:

Note: This is the second part of a series of fan fiction. Please keep in mind that outside of the primary character, Tom Tyler, all others are fictional, and any resemblance to actual persons, living or dead, or actual events is purely coincidental. Screencaps are from Tom's movies and are used simply as visuals. With the usual disclaimer aside, if you would like to link back to this story and need help doing so, please contact me at aventurasdetomtyler@triggertom.com. Thank you and enjoy the story! 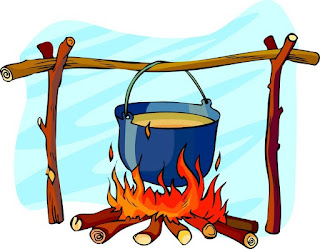 After the covered wagon arrived in Marshall, Missouri, its travelers decided to spend the night there. Twilight was starting to fall. The men outside set up camp and spent some time collecting dry wood nearby, while Julie started to prepare supper along with Joe, who rode the stallion all the way across the country. Joe had plenty of experience in long-distance travel on horseback, and preparing supper afforded him some time to speak to the only woman in the group. As he pared some root vegetables for dicing, Julie added some beef stock to drinking water in the cooking pot for stew. Joe glanced at her, thinking that she tried to be engrossed in what she was doing while at the same time thinking about Tom.

“Pretty long day, huh Julie. You seem worried about Tom. I know you care about him.” Joe leaned back and wiped the back of his right hand against the side of his jeans. His green eyes had a devilish twinkle in them, dirty blond hair disheveled across the top and back.

Julie hesitated before answering. “I do, Joe. Maybe too much.” Out of habit, the right corner of her mouth turned down while she thought. “What happens if we don't get Tom to our destination in time?” She uncrossed her legs, smoothing the skirt of her dress.

“Aw, we'll get him to Oklahoma in time, Miss Julie. It's just that – well I was wondering.” Joe picked up his knife and started to dice the parsnips and potatoes. Julie watched his slow, deliberate movements. The neat piles of chopped onions and carrots were joined by the other vegetables, forming a colorful row, ready to be added to the cast iron pot.

“Wondering what?” Julie caught a whiff of smoke from Joe's cigar which rested on a chunk of sedimentary rock next to the cooking utensils.

“I think there is something you should know about Tom and I don't rightly know how to put it to you.” Joe placed the diced vegetables so quietly into the pot, no splash of water could be heard. He looked at her and smiled, revealing his straight white teeth. As they spoke, Tom crawled to the rear of the covered wagon and leaned against a board, savoring the clean air. He was not supposed to move around too much, and was also afraid Julie might see him. Tom kept out of their direct line of sight and snuggled beneath a blanket. He thought he heard his name being spoken outside and did not wish for anyone to know he overheard any conversation about him.

“Why?” Julie curiously asked Joe. “It's not serious, is it? I mean outside of his being ill.” Her eyes cast down towards the cooking pot over the campfire. 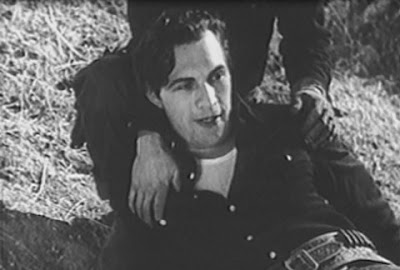 “Well sort of. Maybe I should not have said anything.” Joe picked up the wood spoon and stirred the slow-cooking stew. Julie was hungry, as were the other men who sat on the other side of the wagon tending to the horses. “No. I was wrong to say anything, Julie. I know how you feel about him. I have to respect that.” Joe took a drag on his cigar, holding it in his weathered hand. Tom heard every word quite clearly, jolted into an awareness he never felt before. 'Did I do something wrong?' Tom thought to himself. He crawled back towards the middle of the wagon and pretended to sleep while supper cooked. 'I wonder what Joe was going to tell Julie?' Tom became a little scared but told himself not to reveal any feeling as such nor act as if he heard the conversation, for fear of alienating Julie or one of the men. He pulled the blanket up to his face and thought he heard the two men on the other side of the wagon. Tom shut his eyes and concentrated on the slowly fading sunlight on the western horizon. He breathed deeply, developing a natural rhythm, an exercise Julie taught him to help ease his physical pains. Supper will be ready by the time he awoke from his nap, and Tom was already starting to forget the conversation that transpired between Julie and Joe not more than ten minutes ago.


Posted by TriggerTom at 9:57 AM No comments:

Of the different vintage film poster sizes, one of the rarest is the banner. Usually made of canvas weight fabric with bright colored painted designs and lettering, these banners were displayed in the front of a cinema near the box office. Meant to be eye-catching to the movie patron, these banners were often manufactured in limited quantities which means that very few of them survive today, particularly those from the 1930's to early 1940's. Banners from these two decades on average measured from 119” x 36” to 117” x 35” in size, with some variation in size. These movie banners had a total of eight grommets along the top and bottom edges, which were then tied to a bar and displayed so that it hung flat without sagging. When a cinema was lucky enough to acquire a banner, it would arrive rolled up, and would be stored the same way after the movie it was advertised for ended its run.

There are three Tom Tyler movie banners that are confirmed to exist: “Phantom of the West”, “Battling with Buffalo Bill”, and “Adventure of Captain Marvel”. In very good to excellent condition, these banners can command up to $1000.00 upwards in price.

Posted by TriggerTom at 3:19 PM No comments:

One interesting and fascinating thing about the many Dutch translated titles of Tom Tyler movies is they were seen not only in the Netherlands but also in the many Dutch colonies around the world during the first two decades of Tom Tyler's film career. For example, a number of newspapers and broadsheets mention cinema ads shown in what was then the Dutch East Indies (modern day Indonesia) and Dutch West Indies like Curacao, Bonaire and Saba. When these Tom Tyler films were shown in such exotic locations, it was usually for the benefit of Dutch traders in these locales. Even “Adventures of Captain Marvel” was shown in Indonesia, usually untranslated as a film title. Sometimes films shown in the Dutch West Indies would also bear a Spanish translated title, as in “El Problema de los Valientes”, published in Amigoe di Curacao June 13, 1950 – Santa Fe Scouts! On the positive side, were it not for Dutch colonization, many of Tom's movies would probably not be shown in these parts of the world during the 1930's. It is also worth mentioning that according to the Dutch Puntenlijst (ranking list) of popular culture figures in Bataviaasch nieuwsblad, August 7, 1928 Tom Tyler ranks at #12. With thanks to Delpher for the following titles:


Posted by TriggerTom at 9:57 AM No comments: