Film programs have long been used as a form of advertising for the latest and greatest releases from Hollywood. One of the most popular ones published in Germany and Austria was Illustrierter Film-Kurier. Originally published in Berlin by Alfred Weiner from 1919 to 1945, this film program was a supplement to the already established Film-Kurier, a German publication on film, theatre and local entertainment. These film programs covered every genre of film from dramas and comedies to westerns. Often sold in cinemas,  early copies of Illustrierter Film-Kurier were 8 pages long, 6” x 9” in size, stapled at the binding, containing a film summary along with many photo shots of the film. Later publications around the mid-1930's were slightly smaller, about 5 3/4” x 8 1/4” in size. In Vienna, Austria, Illustrierter Film-Kurier was printed by Film Propaganda GesmbH from 1929 to 1956. These later issues were often only two pages long, with not as many photos outside the front and back covers. A number of Tom Tyler films appeared in these Illustrierter Film-Kurier, which include the following:

Posted by TriggerTom at 1:08 PM No comments:

Tom and his bevy of beauties 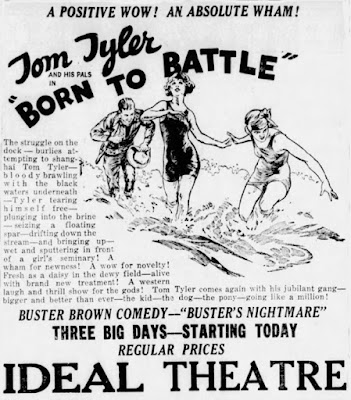 The average Tom Tyler western often conjures up visions of fistfights, physically demanding stuntwork performed by the star, and a gripping story line that involves cattle rustling and ranch ownership, but one concept not often thought about is a group of pretty girls: in plot terms, a bevy of beauties. Sometimes having one member of the fairer gender was not enough to complement Tom Tyler and pals Frankie Darro with Beans the dog in the early FBO silent films. At first glance, it does not seem like a bevy of beauties might fit into the story of one of Tom's movies, yet it has, not just once but four times. Only one of these four movies exists on DVD, “Ridin' Thru” although plot descriptions of these other films exist.

In “Born to Battle” (1926), Tom encounters a group of young beauties in bathing suits after escaping from a boat where he was kidnapped. The young ladies are outside enjoying the beautiful weather in their bathing suits, next to the girls' school they attend when the unexpected “merman” emerges from the river, dripping wet, right before their eyes. Blushing, Tom politely excuses himself from their presence and gets back on the trail of tracking down a band of ranch property conspirators. The same girls' shool shows up again in “Wild to Go” (1926) where Tom once again swims in the river nearby, and sees a group of girls in bathing suits. Tom is there for a reason though, for he is to meet with his boss's daughter Eugenie Gilbert who attends the school but soon finds himself and Eugenie confronted by kidnappers. 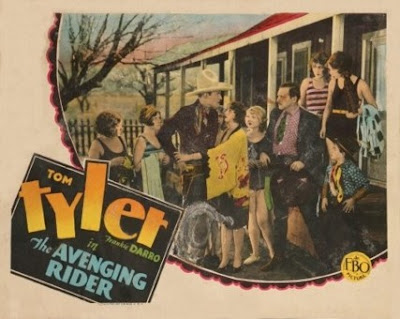 Tom did not always discover a bunch of young lovelies on a riverbank, however. Sometimes the bevy of beauties would try to transform a cattle ranch into a girls' school, as they did in “The Avenging Rider” (1928). Instead of just bathing suits though, these ladies wear day dresses and evening dresses. They also wear exercise clothes when they work out in the ranch's barn which serves as their gym, plus they turn a small mountain lake into their swimming hole.

Finally, there is “Ridin' Thru” (1934) where Tom and his pal Ben Corbett arrive at a dude ranch for jobs and view a bunch of pretty girls sunbathing in their swimsuits, as well as dancers who vie for the attention of the two newly arrived cowboys on the ranch. Ben seems to take naturally to the presence of these beauties while Tom is a bit more shy, glancing at the ladies over his shoulder as he tends to ranch business, helping the owner track down a ring of horse thieves. These scenes are only a minor addition to the film, but gives the viewer an idea of Tom's general reaction to a group of young ladies in his early silent films.

Posted by TriggerTom at 3:58 PM No comments: 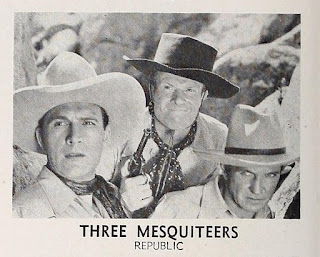 Soon after Tom Tyler completed his most successful – and best-known role – as Captain Marvel in “Adventures of Captain Marvel” (1941) for Republic Pictures, he joined the famous western film trio known as The Three Mesquiteers, characters that were created by William Colt MacDonald. Also filmed by Republic at the time, Tom made a total of thirteen black and white Three Mesquiteers films, portraying Stony Brooke. Of course, Tom was in two other Three Mesquiteers movies prior to his new tenure but as different characters: Sundown Saunders in “Powdersmoke Range” (RKO; 1935) and as Jackson in “The Night Riders” (Republic; 1939). It is worth noting that Tom's role as Stony Brooke marked a new chapter in his acting career, after completing what is presently considered the greatest film serial ever made. 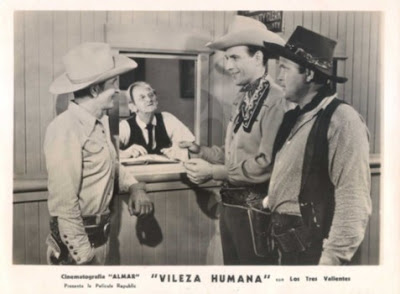 Tom's new contract with Republic ran for a year, from 1941 to 1942, according to his biography by Mike Chapman, then later extended for one more year, from 1942 to 1943. “Outlaws of Cherokee Trail” (1941) marked Tom's first starring role as Stony Brooke, and with twelve more films made over the next two years, culminated in “Riders of the Rio Grande” (1943), which was also the last Three Mesquiteers film made by Republic. Tom's co-stars in these westerns were Bob Steele (Tucson Smith), Jimmie Dodd and Rufe Davis (Lullaby Joslin). Their adventures were exciting and as a sign of the times – The United States entered World War 2 by the end of 1941 – two Three Mesquiteer films included Nazi references in the plot: “The Phantom Plainsmen” (1942) and “Valley of Hunted Men” (1942). 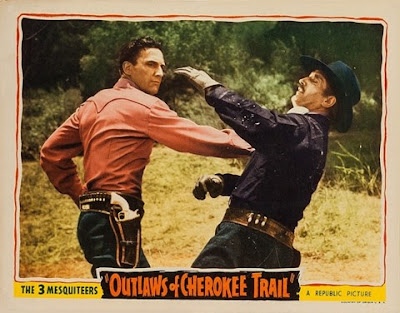 The rest of these Three Mesquiteers films provided the perfect escapism during that looming period of world history, the kind of entertainment desired at a weekend matinee. Best of all, their adventurous exploits were always injected with a hearty dose of humor, whether it was Lullaby dressed in drag eavesdropping in on an inside conversation that would lead the trio to the killer, or in blackface selling watermelons to help his other jailed pals break free. They even dressed up as Indians to go undercover and succeed in their mission in one story; in another story the Mesquiteers also come upon a miniature horse who was witness to her master's murder, and help track him down, even at the cost of their being accused of the actual murder. Periodically, Lullaby would also play a guitar or sing a song, or both, while the pals were traveling on horseback or spending an evening at home with friends. 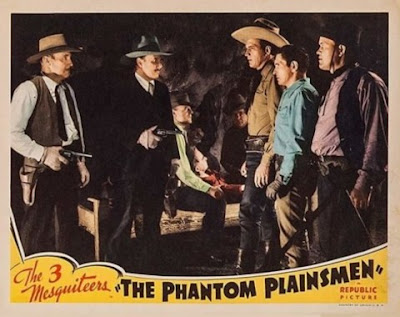 As Stony Brooke, Tom Tyler cut his usual heroic cowboy figure: physically strong and handsome, rider of the white stallion named Silver (Silver Chief), often ribbing along with pals Tucson Smith and Lullaby Joslin as the script demanded. It only seems natural that Tom Tyler portrayed one of the Three Mesquiteers; as Stony he is the most level-headed of the three, providing 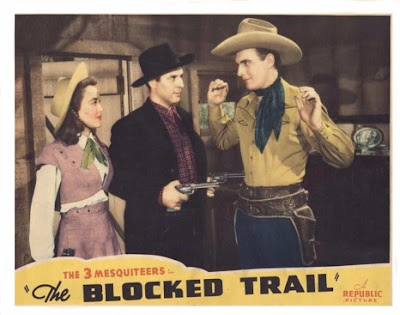 logical solutions to their seemingly endless number of unfortunate situations they got into, or being the best fighter of the three. For example, in “Code of the Outlaw”, Stony is able to buy back the boy Tim's rambunctious horse from Dick Alexander, one of Tom's regular co-stars in films like “Coyote Trails” (1935) and “Mystery Range” (1937), always came up against him in a major fistfight. While Tom Tyler once again had his name in the forefront, sharing top billing with Bob Steele, Rufe Davis and Jimmie Dodd, they all had the right on-screen chemistry required to make the Three Mesquiteer movies as enjoyable as they are.

Following is the list of Three Mesquiteer films where Tom Tyler starred as Stony Brooke:

Posted by TriggerTom at 10:20 AM No comments: