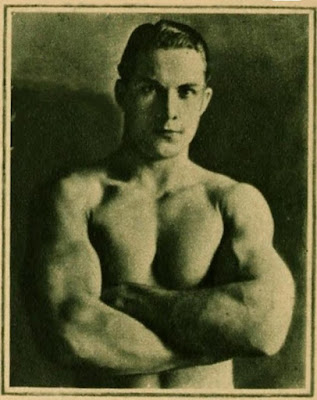 While Tom Tyler was a champion weightlifter, it is important to keep in mind the fact that he was not by any means a bodybuilder, at least in the modern sense of the word, a label more commonly ascribed to actors like Steve Reeves or Arnold Schwarzenegger. Tom did however have a naturally muscular physique honed to perfection through weightlifting, nothing overemphasized nor overdeveloped as in the case of some professional weightlifters, such as Greg Valentino. Anabolic steroids did not even come into being until the 1930's, and chances are very good that Tom would not even have to use them. It is safe to say that Tom Tyler's physique at the height of his weightlifting career, between 1925 and 1928, was aesthetically attractive to both genders, boys and men who wished they had Tom's build, and women who dreamed of marrying a man like Tom.

According to Mario De Marco's book “Tom Tyler and George O'Brien: The Herculeses of the Cinema Range”, Tom's weightlifting measurements were as follows: 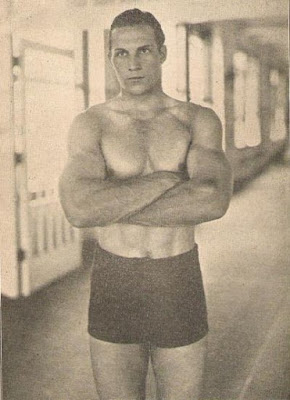 Tom was right-handed by nature, and it is perfectly natural for the dominant hand and arm to be slightly more large and stronger than the non-dominant one. When Tom won the American Amateur Heavyweight Weightlifting Championship in 1928, there was no Mr. America nor Mr. Universe competition but had there been, there is no doubt he would have won those titles.
Posted by TriggerTom at 4:07 PM No comments:

There are two movies that stand out in Tom Tyler's film career where his manner of dress is quite different from that of a cowboy, superhero, or even a business suit: a Mexican costume. This is seen in his silent film “Flying U Ranch” (1927), and “Unconquered Bandit” (1935). It could be that Tom's dark good looks make him perfect as a caballero. Or maybe it is because his portrayal of heroic figures that are well suited to the dashing and debonair Mexican mold, ready for justice, weapons of choice at his disposal:

That faithful friend and noble foe
Have only bled to make more strong
The yoke that Spain has worn so long.
-William Cullen Bryant
Flying U Ranch 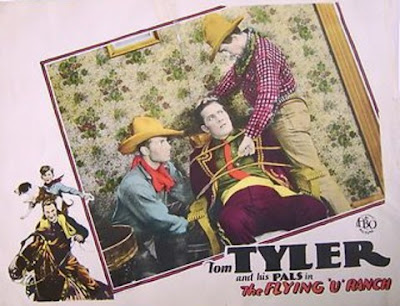 Named after a ranch of the same name up in Montana, “Flying U Ranch” is about a cattle rustler, and a ranch owner whose cattle is disappearing rather quickly, calls upon an agent to track down who is behind the rustling. Tom arrives, disguised as a caballero named Miguel Garcia, and soon finds himself entwined with the ranch owner's daughter (Nora Lane), and makes instant friends with her little brother, Chip Jr. (Frankie Darro). Tom is described in The Honolulu Star-Bulletin (May 19, 1928) as appearing dashing, being dressed in black velvet pants with yellow-gold satin bands spanning the outside length of the pants, a matching jacket with yellow-gold trim, a brightly colored serape (blanket-like shawl), and a sombrero decorated with silver ornaments. There is even one scene in this silent film where Tom is playing a Spanish guitar, accompanied by four other men, one playing a saxophone! Writtern by Bertha Muzzy Bower (B. M. Bower), a 35mm film print of “Flying U Ranch” exists at Cinematheque Royale de Belgique in Brussels. 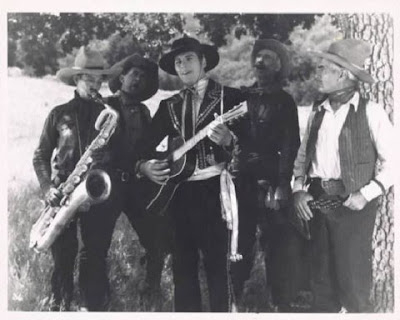 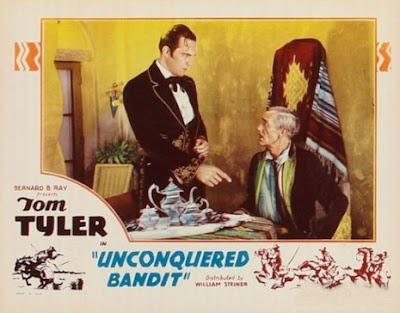 Tom is half Spanish and half English in “Unconquered Bandit” and is out to avenge the death of his father (John Elliott), which means going after Cleyburn (William Gould) who is behind the crime. Tom does not stop there though, for he also wants to break Cleyburn's heart at the same time, making love to his girl (Lillian Gilmore). The fiesta in “Unconquered Bandit” in reminiscent of that in Tom's silent film, “The Canyon of Missing Men” (1930), and the Mexican costume recalls that of “Flying U Ranch” with a few differences: the pants and jacket are black with gold trim, although the jacket has an ornate design in gold at the cuffs as well as at the lower hem, plus a bow tie. Tom also wears a second Mexican costume in tan suede with ornamental stitching on the collar, the pants having black stripes on the outside. With both costumes he wears a sombrero, plus a brown shawl. Of course, he looks equally dashing in both costumes. For those who are curious to see how fantastic Tom looks dressed up in these outfits, “Unconquered Bandit” is available on DVD. 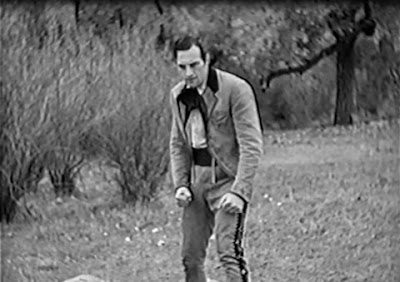 Posted by TriggerTom at 11:16 AM No comments:

Where was Frankie Darro when Tom Tyler filmed “The Cherokee Kid”? Starring in “Little Mickey Grogan”! 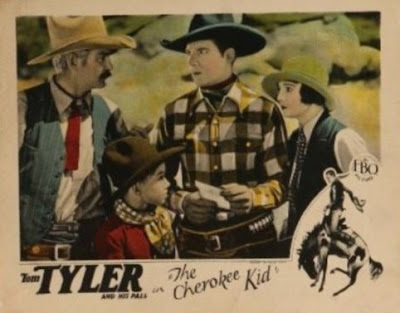 Some Tom Tyler fans knowledgable about his silent film career have heard that “The Cherokee Kid” (1927) was his first one minus his regular co-star, Frankie Darro. It seems like the producers at FBO wanted to give Tom a chance at making a movie without his faithful pal and sidekick, and brought in a substitute by the name of Jimmy Van Horn. Since “The Cherokee Kid” is presently on lost film status, it is impossible to judge if Jimmy was able to follow Frankie Darro. It is safe to say that Tom probably worked well with Jimmy as he did with Frankie, since Tom was a big kid himself. It was not long before audiences wrote in to FBO and complained about Tom's missing partner, so the producers decided to pair up Frankie with his big buddy once again for the duration of Tom's contract with FBO, “The Pride of Pawnee” being the last one in 1929.

So where was Frankie Darro when “The Cherokee Kid” was being filmed? 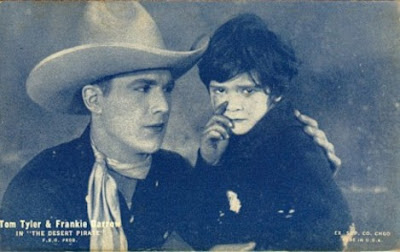 Making “Little Mickey Grogan” on location with Lassie Lou Ahern and Jobyna Ralston! Most importantly, this silent film was also Frankie's first starring role. Interestingly enough, as in a number of Tom Tyler's silent film story lines, Frankie portrays a waif in “Little Mickey Grogan” and successfully brings an architect and a girl who takes him under her wing – and they end up adopting him. On the positive side, “Little Mickey Grogan” is one FBO film that survived in Europe in a private collection and has been restored. Hopefully a film print of “The Cherokee Kid” will show up one day. But the happiest news is, right after Frankie Darro finished filming “Little Mickey Grogan”, he was happily reunited with Tom Tyler for “The Desert Pirate.” Now that is what I call a happy ending.

Both of these film reviews appeared in Motion Picture News, March 3, 1928.


Posted by TriggerTom at 8:57 AM No comments: