"Phantom of the Air" to be released by VCI Entertainment

Some good news with regards to Tom Tyler film serial releases: “Phantom of the Air” will be released within the next year (possibly later on this year) by VCI Entertainment. VCI already offers a number of Tom Tyler 1930’s westerns as well as Three Mesquiteers films on DVD. More details will follow as they come up, plus of course a notice on the website once it is available for purchase. “Phantom of the Air” is a 12-chapter Universal film serial from 1933 which also stars Gloria Shea, LeRoy Mason, William Desmond, and Sidney Bracey. 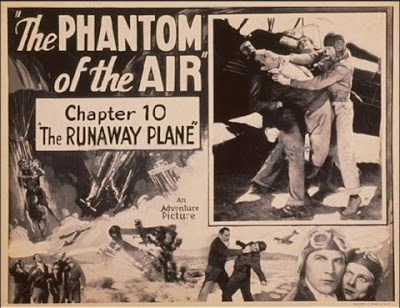 Posted by TriggerTom at 7:28 AM No comments: 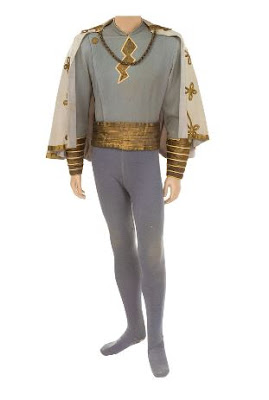 The very first silver screen Captain Marvel, as portrayed by Tom Tyler, had a superhero costume that was custom made for his muscular physique, which he displayed to perfection during the filming of the Republic Pictures serial. The costume itself was gray instead of red so that it would film better in black and white. Unlike many superhero costumes, this one was not padded in the biceps, for Tom Tyler certainly did not need any emphasis with his champion weightlifting build. While the colors were slightly different, the form-fitting costume was still identical in detail to the red and yellow costume that Captain Marvel wore in the comic books. The four-piece costume consisted of a half-length white cape with the gold braid designs upon it, in addition to the gold lightning bolt upon the chest, six gold bands at the cuffs on each arm, and gold belt. The tunic is of gray wool, with the front flap buttoned at the upper right shoulder. The lower half of the costume, which resembled tights with feet, were in the same color gray to match the tunic. The boots were yellow in color, with the standard top fold. It seems like nothing was missing from Tom Tyler’s Captain Marvel costume, right down to the very last detail. Little information exists as to who created the costume and sewed it, although existing copies have a “Western Costume” stamp inside the collar. Naturally, stuntman Dave Sharpe wore the identical costume matched to fit his frame for all of the fancy leaps and backflips in “Adventures of Captain Marvel”. 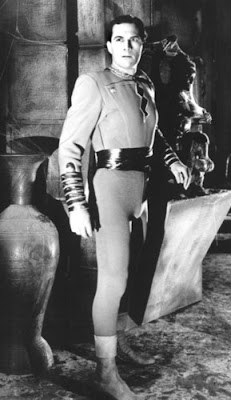 As with most cinematic wardrobes, several versions of the Captain Marvel costume were made, which have sold at auction sites online like eBay. According to “The Tom Tyler Story” by Mike Chapman, one of the original Captain Marvel costumes described above was listed at a market price of $10,000.00 – ten times the amount of money Tom was paid to play the superhero in the film serial. Today, the costume remains at a market price between that amount and $15,000.00 – not bad for its being the very first superhero costumes made for film, even before that of Superman’s.

Posted by TriggerTom at 5:18 PM No comments:

Based on the 2011 DC Justice League The New 52 story by Geoff Johns and Gary Frank, “Shazam!”  manages to combine not only the origin story as narrated by these two gentlemen, but also the comedy elements of the early Captain Marvel stories in Whiz Comics since 1939, and superhero growing pains, bringing the C. C. Beck and Bill Parker creation up to date in the 21st century.

After several aborted attempts to get the movie made, “Shazam!” finally debuted in cinemas worldwide during the first weekend of April 2019. Directed by David F. Sandberg, and written by Henry Gayden and Darren Lemke, the DC movie stars Zachary Levi as Captain Marvel and Asher Angel as Billy Batson.  There is a yin-yang between comedy in the early comic books by Fawcett Publications since 1938 and The New 52 dark universe, with no shortage of special effects from playfully cast lightning by Captain Marvel to the animated looming Seven Deadly Sins, ready to unleash havoc courtesy of Dr Thaddeus Sivana (Mark Strong).

“Shazam!” introduces the background story of Thad Sivana, a miniature monster in the making who causes a serious car accident, almost killing his brother and father, who is the owner of a major conglomerate. Young Thad ends up journeying to The Rock of Eternity where he encounters the wizard Shazam (Djimon Hounsou), only to find himself discarded by the ancient mage who is seeking a young boy to succeed him. Once Thad is sent back to his immediate present, castigated by his father, he then spends the rest of his trying to regain access to the mysterious location which remains concealed by magic. In steps Billy Batson, whose life story is also told in a brief flashback before he finds himself adopted by Victor (Cooper Andrews) and Rosa (Marta Milans) Vasquez, who are foster parents to five other children. Billy quickly becomes close to Freddy Freeman, who is slightly younger than him, plus Mary Bromfield, who is on the verge of graduating from high school and applying to colleges. Still unsatisfied with his position in life as a teen, Billy continues to seek out his real mother, eventually finding her. To his shock, Billy learns that his mother, who does not make good choices when it comes to boyfriends, was in her teens when she had him, and that his father is in jail in Florida.

Once Billy discovers himself in the role of a superhero after making the same journey to The Rock of Eternity and becomes the Chosen One by the wizard Shazam, he is not fully aware of the potential of his new abilities; he does not know what he can really do, although he delights in generating electricity, using it to charge people’s cell phones as he walks past them in public. Captain Marvel continues to go about his daily routine, accompanied by Freddy most of the time while preventing crimes such as handbag thief and a convenience store holdup. Once Captain Marvel discovers who his main enemy is – Dr. Sivana – he must engage in the most important battle of his life – leaving his childhood behind temporarily to save the world from destruction. At this point, it is the wisdom of Solomon that really kicks in to Billy when he learns how to remove the evil magical force from Sivana.

“Shazam!” references Tawky Tawny the tiger, in the form of the plush toy tigers prizes at the balloon and dart booth during the Christmas Carnival, along with Mr Mind, the worm during the early part of the movie, characters in the original Whiz Comics publications. What is noteworthy in “Shazam!” is that like “Adventures of Captain Marvel”, the superhero’s name is never formally introduced to the audience; it even goes further to never refer to him as Captain Marvel at all, possibly to avoid confusion with the Marvel Comics “Captain Marvel” movie released only weeks before “Shazam!” Instead a variety of nicknames are given to him: Captain Sparklefingers, even more simply- hero. Billy is only supposed to say the word Shazam in times of need, not as a means to impress others around him, certainly not himself. At one point Freddy speaks to his foster brother Billy like an authoritarian figure, much like Jackson Bostwick’s Captain Marvel, or even John Davey’s Captain Marvel from the 1974-1977 television series “Shazam!” Billy might be Captain Marvel yet even after his initiation, still has to work hard on understanding the powers bestowed upon him and the responsibilities that come with having these powers, the properties of the thoughtforms who have seemed to disappeared in the distant past of human history (or did they?). Zachary Levi, at age 38, looks younger than his age, and with his “big kid” personality, really does come off as a 14 year-old inside his 6’3” frame. Like Tom Tyler in “Adventures of Captain Marvel” (1941), he pulls the same expression,  looking at himself then his surroundings. Yet the resemblance to Tom’s Captain Marvel stops there, reverting back to more childlike superhero as he was originally intended to be in Fawcett Publications rather than a World War 2 era superhero who uses a machine gun to vanquish his enemies, and throwing them off tall buildings.

Mark Strong pulls off a formidable Sivana, able to unleash the Seven Deadly Sins whenever he chooses, using his demon eye which glows blue. At times he takes on the appearance of Aleister Crowley(early 20th century ceremonial magician and founder of Thelema) on steroids. Unlike the comic book Sivana who is short in height, Mark Strong is 6’2” in height, making him a substantial physical adversary of Captain Marvel. The movie soundtrack includes Queen’s “Don’t Stop Me Now” which plays as Freddy tests Billy’s new powers as Captain Marvel, and “Do You Hear What I Hear?” sung by Bing Crosby during the Christmas holiday with the Vasquez family. The top-notch production team of “Shazam!” includes Peter Safran, Geoff Johns and Dwayne “The Rock” Johnson.

How many families do you know of who discuss superheroes and their various powers at the supper table?

Posted by TriggerTom at 6:50 PM No comments: 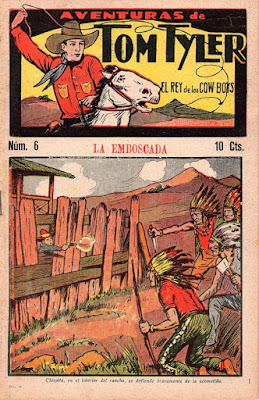 Probably one of the rarest paper film collectible on Tom Tyler coming out of Spain is the twenty-one issue booklet set, Aventuras de Tom Tyler. Arranged and written as a serial, these booklets measure 6 ½” x 9 3/4” in size, made from newspaper quality paper and published by El Gato Negro, Barcelona Spain during the late 1920’s or early 1930’s. Each issue is eight pages long and contains two black and white illustrations.

Unlike the Biblioteca Films film booklets, Aventuras de Tom Tyler is an early type of fan fiction based on the American actor Tom Tyler. Each issue has a masthead with an illustration of Tom at the left and the words Aventuras de Tom Tyler in red and black, along with “El Rey de los Cow-Boys” underneath, against a yellow sky, with a desert and mountain at the bottom. Below the masthead is a full color comic book style illustration of Tom in an exciting scene from the story inside. These scenes include the following: Tom being tied to a runaway

Tom Tyler is not the only American actor to get a series of fan fiction created in his name; El Gato Negro also published series with Shirley Temple and Tom Mix in a similar format. 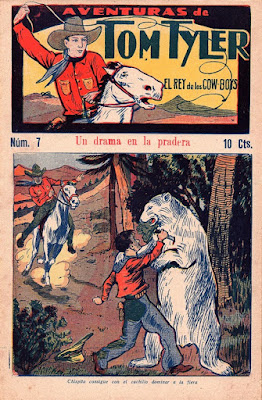 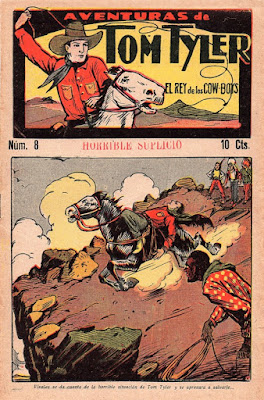 Posted by TriggerTom at 8:27 AM No comments: