The thought of a Hollywood actor being labeled a “conversation piece” may seem amusing to most people but that is exactly what Clifton Webb, the star of movies like  “Laura” (1944) and  “Mr. Belvedere Goes to College” (1949)  has in fact called Tom Tyler, according to a Hollywood column in The Tampa Tribune (December 11, 1935). This was around the same time when Tom appeared at a party given by Dorothy DiFrasso, the popular Hollywood hostess during the 1930’s, for she was mentioned in the newspaper column at the same time.

Chances are that Webb was probably at the same party that Tom was, admiring the shy handsome B-western star who was the center of attention for some of the actors and actresses in attendance. Enchanted with Tom’s sparkling eyes and dazzling smile, they were struck by Tom’s ability to be congenial yet not an extrovert, especially in a social setting. Being politely brief when engaging with the other Hollywood stars, Tom and his peers discussed their most recent film roles as well as their next roles in the movies. It is unknown if Tom’s weightlifting career was ever the topic of discussion among the A-list stars although it is possible that some actresses took the time to admire his muscular physique, if only to elicit a shy reply from Tom.

Combining the charm factor with his level of attractiveness, there was reason for the most prominent of Hollywood actors and actresses to talk about Tom Tyler, statements made about him to others were always positive and complimentary. 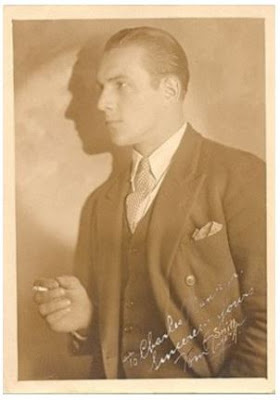 Posted by TriggerTom at 2:56 PM No comments: