The film going atmosphere counts too

For the youngsters on their way to the Saturday matinee to enjoy the next Tom Tyler western during the 1930’s, plus a cartoon or two, and a film serial chapter, did not mean the immediate surroundings had to be bland. Many times film exhibitors of the independent cinemas and neighborhood cinema houses would take a cue from the Hollywood trade publications on what might provide visual appeal to the targeted audience. As an example, a film review in Motion Picture Times October 6, 1931 for "The Man from Death Valley” provided suggestions to film exhibitors (that is, cinemas) to really get into the part for this Tom Tyler film. Some of these suggestions include placing a cactus in the lobby by the inner door to the auditorium, or other western decor such as a saddle along with a lasso, or hang western art from the ceiling. Such items perfectly complemented the movie posters in their display cases. Due to the popularity of B-westerns during the above mentioned decades, many of the above named cinemas had a number of inexpensive items on hand just for that purpose, to add a little atmosphere in the lobby to enhance the movie-going experience. Those who looked forward to viewing these westerns could feel right at home, with the sense of community being retained. Many an older family member might tell the younger generation stories of how these independent cinemas would run admission price specials, or Depression glass night, or even local food drives being held in order to boost patronage. At one point, over 2,000 of these cinemas across America would take part in these promotions. Non-film promotional events, unlike the previously mentioned elegant cinema palaces, these independent and neighborhood cinemas had the liberty to decorate the lobby to promote the film being shown on that particular day.

The cinema patrons who have had the opportunity to view the latest Tom Tyler movie – and in the brand-new format called sound, or in film lingo, talkie – and took note of how the lobby was decorated just for the occasion, would tell their family and friends about it as a way of encouraging them to see the movie too. The idea of a movie house being decorated in a specific manner to add to the film viewing experience seems far fetched, but not when one stops to realize that many modern homes with a media room is decorated in a very similar manner.

Posted by TriggerTom at 3:17 PM No comments:

A voice perfect for talkies: Tom Tyler in “West of Cheyenne”

Once Tom Tyler’s silent film career finally wound down by the end of 1930 – his last one being “Canyon of Missing Men” for Syndicate Pictures –  he had to adjust to the brand-new invention known as synchronized sound film, better known as talkies in order to keep his career going. By 1930, most cinemas made the transition to sound pictures but Tom was not quite ready for it. He held out on the new sound pictures for as long as he could, reportedly due to his foreign accent, according to his friend and screenwriter Oliver Drake, as mentioned in “The Tom Tyler Story” by Mike Chapman. Even though Tom Tyler was born in America (his birth name was Vincent [Wincenty] Markowski), like many children of recent European immigrants, spoke his native language at home while speaking English outside the family. Cinema patrons who never had the opportunity to meet Tom Tyler in person and listen to him speak could only imagine what his voice sounded like at the height of his silent film career. Tom Tyler was after all the epitome of outdoors virility in Hollywood, should he not also have the perfect voice to match his looks, personality and physical strength? 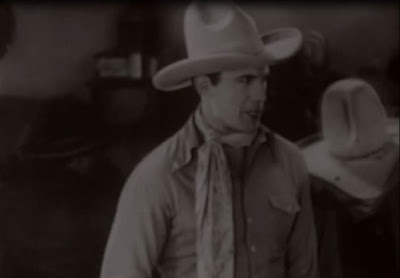 In fact, Tom Tyler did indeed have a voice that met the above qualifications and made him perfect for talkies. Once he got together with one of Drake’s friends, J. Frank Glendon, taking a series of enunciation lessons in order to lose his accent. As with the horseback riding lessons in order to get that star contract with FBO in 1925, Tom worked hard at his enunciation, and after making one test talkie short for Pathé in 1930, “Half Pint Polly”, was well on his way to successfully transitioning to talkies. “West of Cheyenne” was a milestone in Tom Tyler’s career, probably just as exciting for him as for when he made “Let’s Go Gallagher” in 1925, his first starring role in a silent film. The story was simple enough in Tom’s first talkie, about a young man whose father was framed for murder and held captive in a forbidden town known as Ghost City. Written by Bernard Cohen and Oliver Drake, the movie was produced and directed by Harry S. Webb, who would continue to direct a number of Tom Tyler movies in the 1930’s, sometimes using the name Henri Samuels.

With the release of “West of Cheyenne”, Tom’s voice was stressed in press kits, obviously to encourage fans and cinema patrons in general to attend showings of this movie. Even film reviews like the one in Variety March 4, 1931 which describes the plot in “West of Cheyenne” as somewhat of a routine western, touts Tom Tyler’s voice as being the best part of the movie. It is doubtful that Tom Tyler’s first talkie was a put off for those who have long appreciated and admired his work. Perhaps the most important question was, “How distinct was Tom’s voice?” to those who have never heard him speak on film. In response to that question, the answer is, “very distinct” - distinct enough to pick out on a radio show, had Tom been a radio actor. In the newspapers, cinema ads described Tom’s voice as splendid (The Amarillo Globe-Times, Amarillo, TX, October 9, 1931). For those of us who take sound film for granted, the majority of us having been born during the sound era, it may be hard to imagine the pleasant surprise of hearing Tom Tyler speak for the first time in a movie. Along with the usual treats of action, hard riding, hard fighting, and moments of tenderness with his leading lady Josephine Hill, Tom Tyler never disappoints.

Posted by TriggerTom at 7:27 PM No comments: 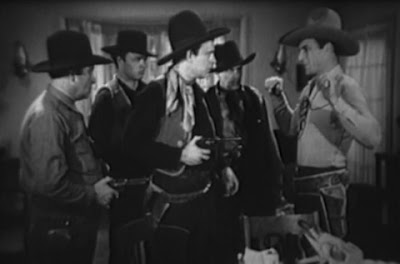 The son of a very famous silent film actor – one better known as “The man of a thousand faces” - Lon Chaney Jr. usually is not the first name that comes to mind when discussing B-westerns of the 1930’s.  While he certainly has the looks and demeanor that make him the perfect heavy in a western, the craggy faced actor has in fact appeared in a number of low-budget westerns dating back to the early 1930’s, often billed under his given name, Creighton Chaney. Lon Chaney Jr. has appeared with stars such as Dorothy Gulliver, Tom Keene, and Gene Autry in low-budget westerns. In “Cheyenne Rides Again” (1937), Lon teams up with a different kind of western star, Tom Tyler, who turns in one of his best performances in a B-western. Lon Chaney Jr. not only gets to see one of Hollywood’s handsomest men up close and in person – but also gets to witness Tom’s athletic prowess. How incredible and impressive is that, for an actor like Lon to appear in a movie with Tom Tyler? In Lon Chaney Jr.’s case, not only did he get to witness Tom’s physical strength in action – but also experience it. 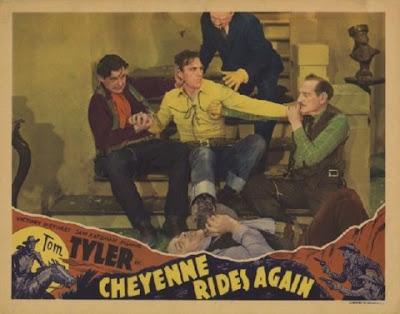 Playing the cattle rustler Girard – even that name sounds clichéd for Lon, evoking a noir image of gangsters ready to pull a bank job – Lon is in many ways the perfect match for Tom Tyler. The onscreen chemistry is there, the hero and the heavy, when the two men are sizing up each other, and ready to throw the first punch. For example, when Girard and his men are in Tom’s living room, anxious to get their hands on the 10,000 dollars that Tom confiscated from them and hid in the room they are standing in, the camera pans each man back and forth. Lon Chaney Jr. looks like he just drove in from a dust storm, while Tom is wearing his skintight white shirt, complete with the black lace bow in front and the side zippers, showing off his physical assets. Being disarmed, Tom feigns a plan to hand the money over to Girard, and in turn, catches the rustlers off guard, sending them across the room using a backward push while standing on a chair in front of the fireplace. Tom sends pieces of furniture at them, a chair or table narrowly missing some of the crooks, while a displaced sofa takes a beating. Girard reaches for his gun, aims and shoots at Tom, who dives out a closed window, narrowly escaping the bullet. 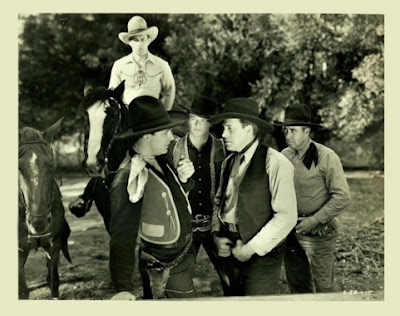 Girard knows that Tom is a Cattlemen’s Protective agent and exposes him as such when they are in a house with Rollins (Ted Lorch) and Gleason (Ed Cassidy) the two men who were about to approve Tom as a fellow rustler. Tom moves quickly, engaging in an all-out brawl but meets a roadblock in the form of Girard’s gun which knocks him out temporarily. Once Tom finds a way to escape and lead Girard and his gang in the direction of the sheriff, his mission is accomplished, and the money is returned to its owners, the cattle ranchers.

As the heavy, Lon Chaney Jr. certainly holds his own against Tom Tyler, and because Tom’s onscreen characters are usually portrayed as being clever, so is Girard in “Cheyenne Rides Again”. To the viewer who watches this movie for the first time, the only question is: “When will Tom’s nemesis finally catch up with him?”

Posted by TriggerTom at 4:41 PM No comments: