As with the Biblioteca Film Spanish film booklets, Los Films del Far-West was also a series of film booklets although genre directed and published by Las Grandes Obras Modernas, Barcelona, Spain, during the 1920's and 1930's. Being a silent film western star, Tom Tyler was given considerable attention in this series, with each film booklet measuring 6 1/4” x 8 7/8” in size, 15 pages long complete with film scenes inside. The paper quality is thin, similar to that used in newspapers. Movies with Tom Tyler in this series include: “The Texas Tornado”, “Terror Mountain”, “The Desert Pirate”, “The Phantom of the Ranch” (1928), “Tyrant of Red Gulch”, “The Pride of Pawnee”, and many others. These film booklets were sold to cinema patrons, and have become valuable as film collectibles. Below are a few Tom Tyler film booklets belonging to this series:

Posted by TriggerTom at 5:11 PM No comments:

It's a sort of magic 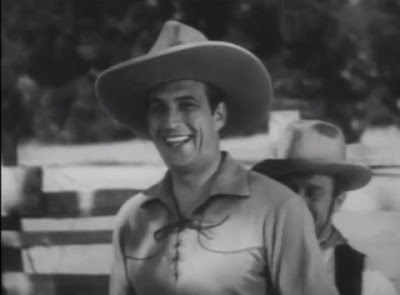 While Tom Tyler's starring roles were B-westerns for small film studios, these films are unlike many that I have seen in fifty years' time. For one thing, not only were the B-westerns that Tom made “quickies” but they also had the raw natural beauty of the outdoors that was well suited for him. Tom Tyler obviously did not need any lavish, fancy sets nor costumes with which to act, and his personality was also well suited for the western genre. Perhaps it was because he was born in the Adirondacks, that most beautiful chunk of land in the northeastern part of the United States, which is rare in that it is not only a national park, but also full of hamlets where people live throughout the year. Add to the mix a hero – Tom Tyler – and pretty much any variation of stories can be filmed using this setting. Even though these films – both his silent films and 1930's talkies – were in black and white, they seemed to come to life on their own, jolting the viewer back into a much earlier time period, even though it may not seem like it for the viewer. Even more so, Tom Tyler himself neither looks nor feels to be of that time period, born in 1903, two years at the end of the Victorian period in the United States. It is his timeless attractiveness, in addition to his low-key personality, which magically brings his starring-role films to life, drawing in the viewer to a point of a feeling of disappearance, if only for about an hour's length of time.


It may indeed be fantasy when I
Essay to draw from all created things
Deep, heartfelt, inward joy that closely clings
- Coleridge

There is a distinct feeling of comfort, wanting to exist in the picture right alongside of Tom himself, maybe not just to experience being in his presence (who would not want to stand right next to a weightlifting champion?) but also the time period his career spanned. The rustic western town settings, the land, and even the way the people spoke back then were all unique to the era. Although the land itself where these B-westerns were filmed have not changed that much at all, it would be a delight to retrace the steps where our hero walked, rode his horse, and rescue the damsel in distress. When it comes to Tom Tyler, it really is a sort of magic.
Posted by TriggerTom at 10:17 AM No comments: 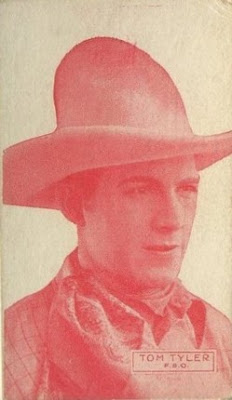 Tom Tyler was one of the luckier silent film actors in that his filmography from the 1920's is considered to be complete. What is not mentioned is that his studio, FBO, also had a number of film titles lined up for him yet for some reason never materialized. Perhaps permission for the stories to be made into films could not be secured in time for them to be filmed. Or there could have been any number of reasons they were not made, although the unmade film titles sound intriguing enough, especially ones like “Jerry Settles Down”, “Cow Punching for Cupid”, and “The Eagle's Talons.” Following is a partial list of the unmade silent films that Tom Tyler was assigned to star in for FBO, and the sources where these films are mentioned:


All together, these count as nine silent film titles. It is possible there were more, should more come across they will be added to another blog post.


Posted by TriggerTom at 4:32 PM No comments: 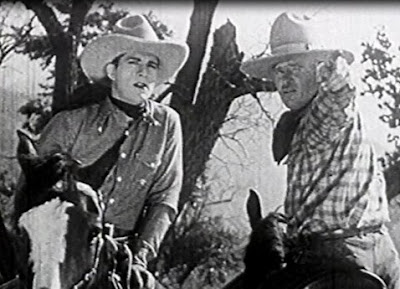 Presently the only FBO Tom Tyler silent film to exist on DVD, “The TexasTornado” is a perfect example of the B-western genre that Tom made for that studio during the silent film era. The DVD which is presently available for consumer purchase is available from Sinister Cinema, made from a 16mm print which originates in either Belgium or the Netherlands (identified as such due to the letter which the sheriff hands to Tom prior to the latter's arrest in the story line). While this print of “The Texas Tornado” is missing about ten minutes down from the original 55 minutes long, the missing piece does not detract too much from the story although it does contain a fight scene which takes place on top of an oil derrick on the Briscoe ranch. After the fight, Tom descends to the ground through use of a guy-line attached to the top of the derrick, a heroic move in the film, although it is difficult to place this scene; it possibly came before Nora Lane (Ellen Briscoe) discovers the oil well workmen have disappeared, quitting the job unexpectedly. 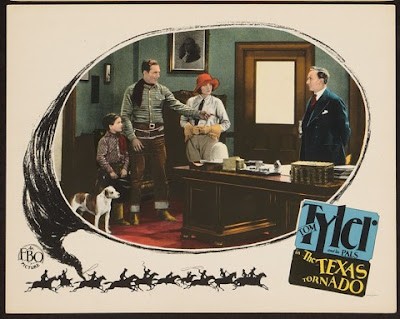 The amount of action that takes place in this film is exciting enough: Tom avoiding a high-speed pursuit on horseback by the ranch landowner named Latimer (who is anxious for the lease to expire so that he can kick out the Briscoe family and keep the oil on the property for himself; the numerous fistfights Tom is engaged in throughout the film, a climactic scene where he rescues Frankie Darro from a gondola between two mountains across a deep ravine, crossing the strong cable, hand over hand with the small boy's arms wrapped tightly around his shoulders. Released in 1928, “The Texas Tornado” also marks the some year Tom set a number of weightlifting records, and his muscle power in the movie shows it, too. The tender moments throughout the film, usually shared by Tom with Nora Lane and Frankie Darro (character Buddy) balance the amount of action taking place in this silent film, Tom eventually developing a crush on Miss Briscoe, while becoming pals with Buddy – in the story, Tom is really the boy's wealthy uncle who helped finance the Briscoe ranch plus the oil drilling. 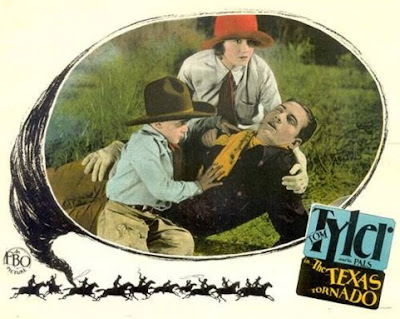 Frankie Darro was a top child actor and clearly had spunk as well as onscreen chemistry with Tom, proving as adept in dealing with Latimer's gang as Tom himself. After Latimer abducts Buddy and tries to get Tom framed for the crime, ends up being the butt of Buddy's funny faces made at him, breaking bottles over Latimer's head while his henchmen laugh at him. Tom Tyler himself is very much a “big kid” in “The Texas Tornado”, a common characteristic of his hero portrayals in the silent films he made for FBO. What makes this silent film so special is not just the studio label, but a glimpse of Tom Tyler's successful career as a leading man in silent B-westerns. This is the same actor who portrayed Captain Marvel and The Phantom, a man known for portraying heroes, embodying innocence in his characters which makes movies like “The Texas Tornado” perfect family fare. 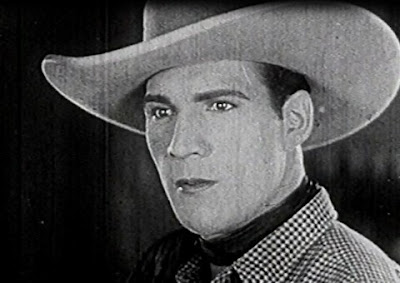 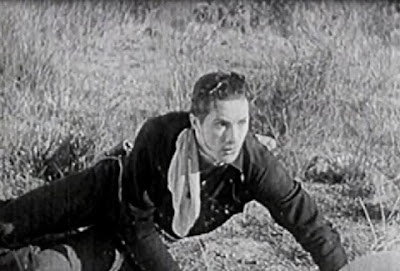 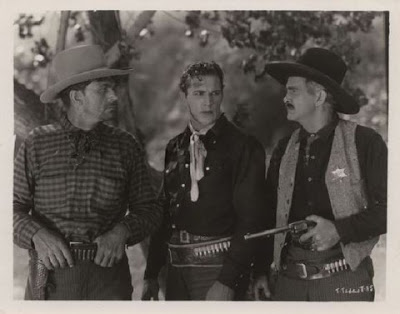 Posted by TriggerTom at 5:13 PM No comments: