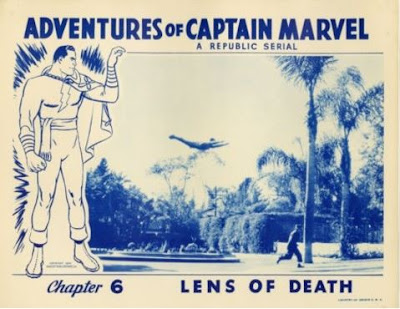 It is that time of the year once again! The Library of Congress is accepting nominations for the National Film Registry. The deadline for nominations is September 15, 2019. It is your duty as a devoted Tom Tyler film fan to suggest his best films for inclusion on this list. Ideally, “Adventures of Captain Marvel”, “She Wore a Yellow Ribbon”, and “The Phantom” should be on the list but of course you may suggest any movies Tom starred in – surprise us and the Library of Congress!

The following movies Tom Tyler appeared in are already in the National Film Registry:

The nomination form is here:

The complete listing of films in the National Film Registry which also include the ones for last year, 2018:

Thank you to everyone who submits Tom’s movies to the LOC National Film Registry!

Posted by TriggerTom at 3:44 PM No comments:

All too often a film historian of B-westerns will write about how popular a star was with the red-blooded American boys but rarely, if ever, mention the star’s popularity with girl cinema patrons. Yet female interest in Tom Tyler long pre-dates his stage name, when he was still a growing young man in Hamtramck, Michigan. As Vincent Markowski, his sister Katherine would often comment to their family, friends and neighbors how good looking he was – and he certainly was – to the point of all girls  in town close to his age would be drawn to his looks, often staring at him while walking down the street (The Tom Tyler Story, by Mike Chapman). It goes without saying Tom Tyler’s physical appearance certainly helped him become a star in Hollywood, along with his acting skills and overall demeanor. To a large degree, Tom’s good looks had a continuous appeal to the female gender many decades later, long after he died in 1954. Females in the twenty-first century found him attractive and sweet enough to give him an exclusive little spot in cyberspace, but was Tom Tyler’s movies of the silent film era and early talkies specifically marketed to just boys? Or were girls included on equal footing?

Surprisingly enough, it was just as common for girls to be a target marketed audience as boys were, according to many Hollywood trade publications and newspaper cinema listings. There are a few reasons for this: Tom Tyler’s level of attractiveness to the opposite gender, but also because many girls received a weekly allowance from their parents which meant enough money to attend the matinee (which usually cost between a dime to twenty cents in the mid- to late 1920’s and early 1930’s). Many cinema listings in the local newspapers included “Boys and girls...” in black and white to draw their attention to the latest Tom Tyler film being shown. At the Victoria theatre in Shamokin, PA, a cinema listing for "Terror Mountain" also advertised free toy musical instruments to the first 500 boys and girls in attendance. Because the date of the ad was the day before Easter in 1929, live bunnies were also available for the children.

One exhibitor took advantage of Tom's image, posting a large photo of him in the lobby of the Jewel Theatre in Verndale, Minnesota (Exhibitor's Herald, November 27, 1926) for the showing of "The Arizona Streak”, knowing that the girls were interested in seeing what he looked like. Another exhibitor in St. Cloud, Florida, commented that the girls raved quite a bit over Tom and how attractive he is, at the showing of "Wild to Go" (Exhibitor's Herald, October 2, 1926). With the silent film being in full force by the time Tom Tyler became a star, memorabilia was also easily accessible in the form of arcade and exhibit cards, stills, and of course the ever-popular request for an autographed photo of the handsome leading man.

Girls would often take part in contests held at the neighborhood cinema, and be actively involved with any events, usually held in the lobby. During Christmas time, many a theatre would encourage both boys and girls to bring in an unwrapped toy or food to be given to the needy, in many cases, through The Salvation Army.

Likewise it was not just American boys who idolized and wanted to meet him – and sometimes did, when Tom shot on location as he did in “Tracy Rides” (Reading Times, Reading, PA, May 28, 1934). Being swarmed by both adults and children wanting to see the filming on the sidelines was exciting – and who did not want to see Tom Tyler up close and in person at the height of his career? The best part of all being, what girl would not be bragging to her friends at school that she met Tom in person during a filming? It was exciting events like this which encouraged and preserved Tom’s popularity in decades to come. While American girls enjoyed Tom Tyler’s movies when they were first exhibited in cinemas across the nation, future generations of his female fans (one of them happens to run the Aventuras de Tom Tyler website and blog) appreciate this timeless man and his work that was meant to be cherished.

Posted by TriggerTom at 7:04 AM No comments:

I am very happy to report the following news: Dario Lavia, a regular on the Facebook and Twitter social media pages for Aventuras de Tom Tyler, is working on a re-edition of the book “Weird Western” which includes the mention of Tom Tyler’s silent films such as “Tyrant of Red Gulch”. Many thanks to Dario for giving the credit to the blog article “Lost in translation: How ‘Tyrant of Red Gulch’ became ‘The Sorcerer’ across the pond” which he mentions in this silent film entry in “Weird Western”, as well as a link to the blog in his entry (free publicity is always welcome). For those interested in purchasing a copy of Weird Western when it is published, the information can be found here. Dario is the owner of Cinefania, a website devoted to fantasy/science fiction/horror films. 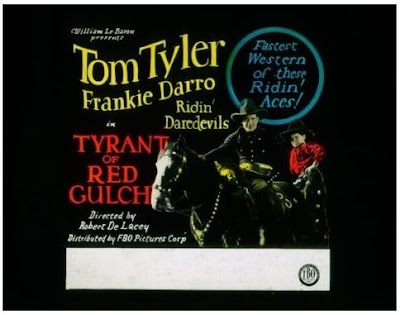