While there has been a monthly newsletter signup form on the homepage of TriggerTom.com for a few months now, I am happy to report that enough subscribers have signed up to receive the monthly newsletter which will have news items, site updates, anything Tom Tyler related that is recent. Thus there will be website items as well as external links included in this monthly newsletter.

To reiterate, everyone who signs up to receive this newsletter will not be spammed, nor your email sold to any list of any kind, and your privacy is entirely secure. Benchmark is the email marketing platform that will be used (which is quite easy, even though I have background experience using Constant Contact, Robly, and Critical Impact at my day job). As with the website and the blog, this newsletter is ad-free and affiliate-free. If you are interested in receiving this newsletter, sign up here. An archive of newsletters will be maintained on the website. 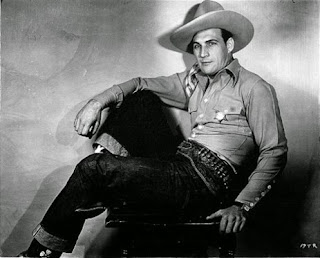 Posted by TriggerTom at 3:21 PM No comments:

Some good news about "The Adventures of Captain Marvel": Shadowland Theatre in Ellenville, New York, will bring back Shazaturdays in March 2017 as part of their Classic Film Series. 2017 is looking really great for Tom Tyler so far! Shazam!

Believe it or not, Tom Tyler received his first acting lessons through a correspondence course back during his teenage years. According to two articles in Boy's Cinema, September 26, 1931 and Motion Picture Classics, July 1928, Tom saved his money through odd jobs for acting lessons, and sent in a coupon from a magazine ad which promised authentic acting courses through the Johnson Screen Training School. Upon successful completion of the course, a letter of recommendation from the correspondence school was sent to him, guaranteeing him work as an actor. Being young and hopeful, once Tom reached Hollywood after leaving home in Michigan, he soon discovered it was not that easy to get work on this letter. Chances are very likely that more than one film studio saw these letters being shoved onto their desks from young hopefuls who desired stardom in early Hollywood.

Tom kept trudging on from studio to studio and eventually got some bit roles (in addition to some side modeling jobs) which formed the first step to climbing up to stardom: a contract with FBO in 1925, his first starring role, “Let's Go Gallagher.” Of course, he also had to take horseback riding lessons in order to get that contract, and Tom was smart enough to say “Yes” and make it work. Perhaps however innocent and hopeful Tom's first intentions were in learning how to act, in addition with his ability to step outside his comfort zone with a good dose of courage, he was able to achieve his dreams in a very short amount of time, between leaving home in Michigan in his late teens, to getting a starring role contract at the age of 22. Now that is what I call success! 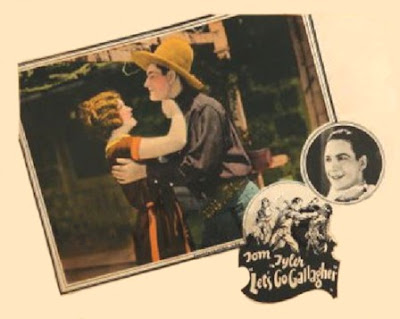 This post regards the quaint upper New York state hamlets of Port Henry-Moriah nestled in the Adirondacks where Tom was born. He came into the world as Vincent Markowski (or in his parents' native language, Wincenty) on August 9, 1903 in Port Henry, most likely in the house where his parents lived.
Located by Lake Champlain, Port Henry-Moriah has a rich historical past that includes nearby mines, beautiful architecture, and parks suitable for outdoor recreation, including boating and swimming. One unique annual event that takes place in Port Henry-Moriah is Annual Champ Day held on the first Saturday of August. Champ is a reputed sea monster similar to Nessie, with sightings dating back to 1819 right in Bulwaga Bay, although the Abenaki and Iroquois tribes knew of some unusual water creature living in the lake for centuries. I wonder if young Vincent ever saw Champ?

But back to Vincent and his Hollywood dreams. Port Henry-Moriah was home to a filmmaking studio called Arctic City in the early 1910's and 1920's which is best known for having shot parts of the silent film serial “The Perils of Pauline” on location there. Chances are he knew about this serial, even though when it was filmed in 1914 he was 11 years old, having regularly patronized the cinema with his family and friends. Being such a small hamlet (the population was 1,751 in 1900), Port Henry offered limited amounts of “city life activities” to its citizens who more likely than not spent their time on outdoor activities, regardless of the season. It is not too difficult to imagine young Vincent playing outside, being as athletic as he was, climbing trees, running down to the bay with his friends, laughing and having lots of fun.

To really enjoy a piece of Vincent's early years in Port Henry, it is worth looking at the hamlet itself, as built by its early settlers. This includes notable historical buildings in Port Henry-Moriah like The Iron Center and Town Hall which are in the National Register, as well as many other architectural structures worth admiring, such as the Mount Moriah Presbyterian Church. Just walking upon the land Vincent placed his first steps on is a wonderful way to be in touch with a part of his happy past. 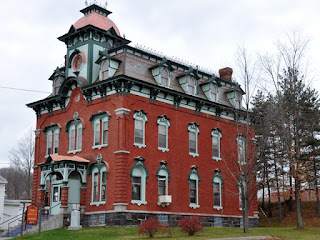 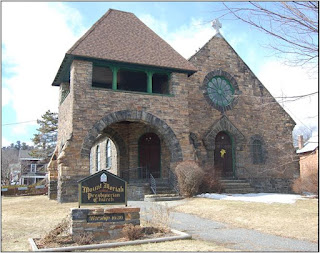 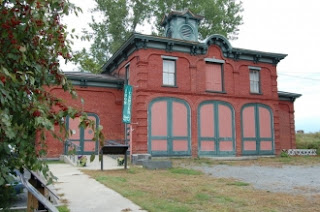 One of the more interesting things to come across at Newspapers.com are television listings of the past. Most of the time I find Tom's movies for Reliable televised either late at night or in the very early morning. For example, here is a listing for "Ridin' Thru" on a Sunday morning (from St. Cloud Times, St. Cloud, Minnesota, February 12, 1989): 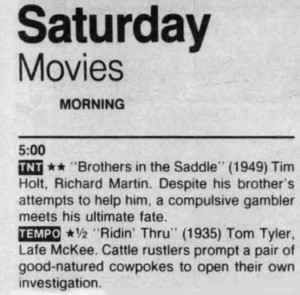 Here is another for "Cheyenne Rides Again", on a Saturday morning (from St. Louis Post-Dispatch, St. Louis, Missouri, December 10, 1982):

What could be a better way to wake up to on a weekend morning and watch Tom Tyler on television?

Personally, I cannot think of anything better than that. :)

Posted by TriggerTom at 4:41 PM No comments:

Welcome to the Trigger Tom Blog!

Yes you heard right - in addition to the regular Trigger Tom site there is now an accompanying blog that will contain non-website images and clippings, musings, and much more on the actor Tom Tyler. What can I say - he was great! To start off with, here are a few newspaper clippings (courtesy of Newspapers.com), one is an ad, the other an article, about Tom when he traveled with the Wallace Brothers Circus (Aiken Standard, Aiken, SC, September 17, 1937): 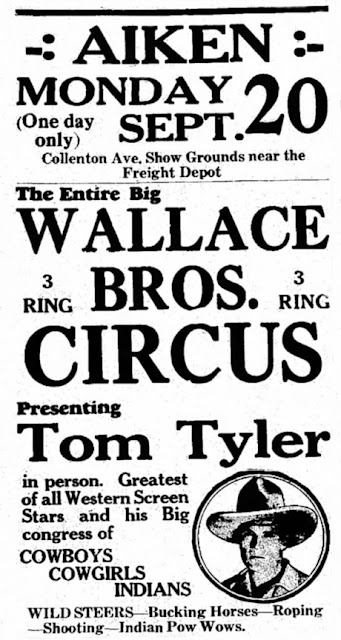 Posted by TriggerTom at 9:33 PM No comments: