The Sonora Kid: The British Connection 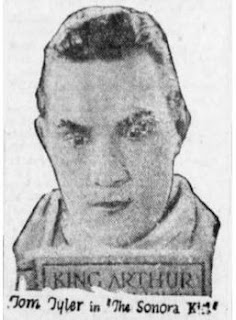 In the realm of silent film westerns with unusual story elements, “The Sonora Kid” (1927) stands out due to its integration of some distinct British elements in the plot. Tom Tyler is a cowboy who obtains work through a ranch owner by the name of Arthur Butterworth. At first glance, the name comes across as being very British – and it is. The surname Butterworth is descended from the former township of the same name in what is now called Milnrow in Greater Manchester, England. Arthur, of course, refers to King Arthur, the famous British leader who protected his land and peoples against the invading Saxons during the late 5th and early 6th centuries. There is also one other story element at present in “The Sonora Kid”: Sir Francis Drake.

British sea captain and explorer Sir Francis Drake first set foot on the west coast of America back in 1579 when his ship Golden Hind plus crew landed at what is now called Point Reyes. In true pirate fashion, Drake managed to vanquish the existing Spanish towns along the west coast near the Pacific before docking his ship after circumnavigating from England. By claiming the region of present-day California for England, Drake made it possible for his country to establish English charters from America’s  Pacific coast to the Atlantic coast. Once Drake secured the region for England, he named it Nova Albion, or New Albion. While he did not establish a residing colony, Drake and his crew sailed back to England in 1580. 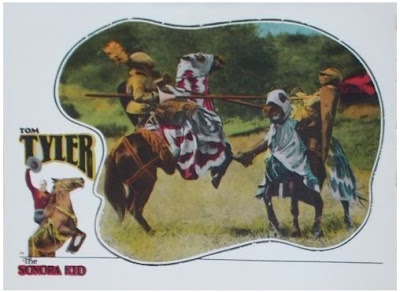 Today, there is a prominent bay named after Drake, located 30 miles northwest of San Francisco. A quadricentennial plaque at Drake’s Bay documents the arrival of Drake and his ship on land considered new to British exploration. Once Drake made his initial landing at Point Reyes, he did not make any effort to plant a British colony there. After only staying there for a year and sailing for home to England, the American territory along the Pacific coast that Drake claimed for England eventually expanded his country’s fur trade commerce up to the northwest region of the United States. 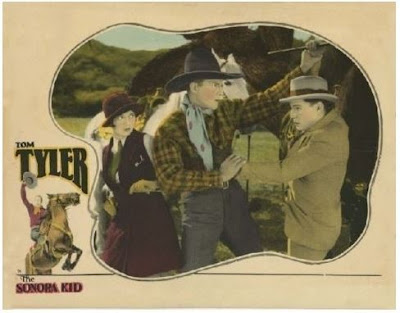 Considering “The Sonora Kid” was filmed in California – and that Sonora is about 182 miles east of Drake’s Bay – it may be easy to conclude how an imaginative script came to be. Written by J. G. Hawks and Percy Heath and adapted from the story "The Knight of the Range" by William Wallace Cook, this silent film stars Tom Tyler, Peggy Montgomery, Billie Bennett, Mark Hamilton, Jack Richardson, Ethan Laidlaw, Bruce Gordon, Barney Furey, and Victor Allen. Tom’s character has the last name of MacReady, a typical Scottish/Irish surname which is altogether fitting for Tom Tyler, for it means “trained; expert” – in his case, an expert horseman. Swinging back to King Arthur, Tom dons a suit of armor and engages in a jousting match with a wealthy man from San Francisco, Bruce Gordon. Two men wearing suits of armor on horseback jousting was pretty much a first for a silent film B-western. As the knight in shining armor, Tom not only wins the jousting match but also the hand of Peggy Montgomery, who was to be married to Gordon. Tom is thankful to Peggy for many things in addition to her giving him a copy of “King Arthur” to read when he was not working. With the newly hitched couple making their home on a ranch not too far from where Sir Francis Drake landed, the memory of Merry Old England is not far away.

Posted by TriggerTom at 8:13 AM No comments:

Collectibles: Tom Tyler on the A. Batschari Mercedes tobacco cards

Tobacco/cigarette cards bearing images of movie stars are popular among collectors of film memorabilia. Much smaller than the arcade/exhibit cards, tobacco cards were primarily manufactured in Europe. More than a few sets were made in England by cigarette companies like Gallaher and Player, while other tobacco card sets were manufactured in countries like Germany. The origins of a tobacco card with a design on one side dates back to 1875 when a small piece of cardboard was placed behind cigarettes in individually sold packs of cigarettes. The cardboard provided support for the paper package containing the cigarettes. Tobacco companies decided to place a design of some kind on these cards: cars, flowers, buildings, engineering feats – and movie stars.

While Tom Tyler did not appear on any of the English manufactured tobacco cards, he did appear on one card in the German A. Batschari Cigarettenfabrik card set. Made in Baden-Baden, Germany, A. Batschari was founded by August Batscharis in 1834 and manufactured both cigars and cigarettes. In the 1920’s, the company was purchased by the Reemtsma Group. The Mercedes brand of cigarette was produced under the new corporation, yet retained the A. Batschari name on its products. The other brand name, Jazmati, was also used in the making of cigarette cards, and used the same photos and card numbers for both sets, each set containing a total of 168 cards. 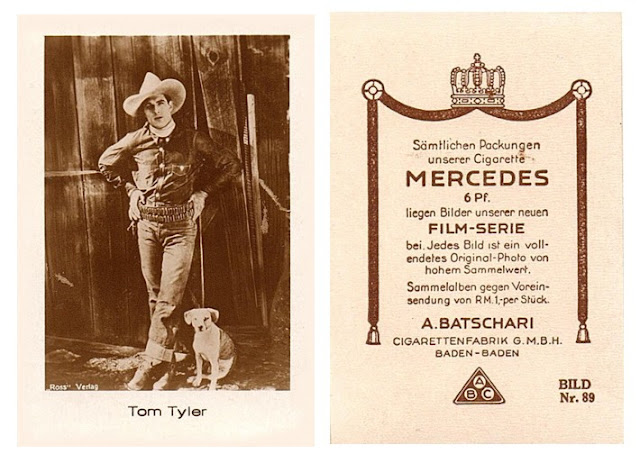 The Mercedes tobacco card with Tom on it bears the number 89 and measures 2 1/16” x 3” in size. The photo is sepia in color, and manufactured in the late 1920’s or early 1930’s. On the front of the card is a full length portrait of Tom Tyler standing by a wood cabin, with Napoleon the dog (Frankie Darro’s pet in the silent films) sitting at his left. This image has also been seen on a Ross Verlag postcard, and not coincidentally, the photo rights on the cigarette card are also printed Ross Verlag in the lower left corner on the front. Other stars in this set include Charlie Chaplin, Greta Garbo, Al Jolson, John Barrymore, and Rudolph Valentino.

Posted by TriggerTom at 3:52 PM No comments: