May 1 of this year marks the 63-year passing of the actor Tom Tyler. It does not seem like it was that long ago when he left this earth but he left behind an interesting career in the field of acting and of course weightlifting. His local obituary in the Detroit Free Press provided a bare minimum of information about Tom, and the few inaccuracies (as well as questions) notwithstanding, appears here.

One thing that stands out in this writeup is that it does not mention the rare disease which affected him during his mid-40's: scleroderma. Scleroderma not only affects the skin but all major organs, often wrecking havoc with the lungs, kidneys, and in Tom's case, heart. Second, his height is listed as 6'4” but that could have very well come from a garnished publicity piece provided by his studios. Most importantly, and the following requires some explanation, his dwindling finances, and film ownership as mentioned in this particular obituary.

Being terminally ill, Tom no doubt had a lot of medical bills to pay, and by the time he was diagnosed, which is around 1946 to 1947 when he made only three movies (“Badman's Territory”, “Never Say Goodbye” and Cheyenne”), he was no longer a leading man, relegated to bit roles in major studio motion pictures. This meant that he was not likely able to secure health insurance if it was offered through these studios, having such minor contract roles.

With regards to film ownership and copyright, such a task would have been the responsibility of his business manager. It is true that some actors and actresses were business savvy enough to request a copy of the film print they just completed with their studios and file a copyright on it. For example, if Tom's movie “Let's Go Gallagher”, his very first starring role silent film back in 1925, were to be copyrighted, his business manager would have contacted the Copyright office in Washington D.C., drawn up the papers, have Tom sign the papers, and provide the required information along with the $1.00 fee that it cost back then (page 39 at the following link: www.copyright.gov/reports/annual/archive/ar-1925.pdf). In brief, any work copyright matters were not his job, Tom's job was to do what he loved the most, which was act. 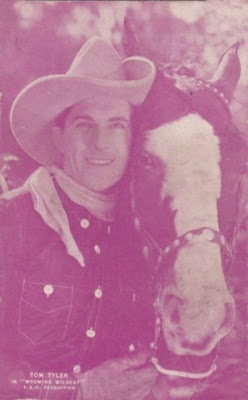 The few questions that arise from reading this obituary are the following: were Tom's two sisters and their children his only survivors? What about his two brothers Frank and Joe? And his parents? Did Tom's parents pass away before he died? It seems utterly tragic just how much Tom Tyler lost during the last years of his life: his once magnificent physical strength, physique, looks, career, and wife (Jean Martel and Tom divorced somewhere between 1944 and 1947). Yet Tom was lucky enough to have a sister like Katherine – giving hospice to a sibling is never easy. Even though Tom Tyler is gone he is still very much remembered, highly thought of and loved by his present generation of fans.
Posted by TriggerTom at 7:40 AM No comments:

Popular on the set

Even though Tom Tyler was a B-western star during the mid-to late 1920's throughout the 1930's he was still popular enough to receive a considerable amount of attention from his public. In fact, it was not at all unusual for Tom Tyler to get mobbed by throngs of visiting fans who wanted to meet their hero in person on the set of whatever film he was shooting at the time. Of course, Tom also ran the risk of being manhandled by fans, as it so happened when he showed up on the clock to shoot “Tracy Rides” (1935), one of my personal favorites, which was shot on location in California:

Considering this happened during the height of his career more or less, Tom was obviously pleased to be afforded so much attention by his public, knowing he was greatly appreciated for his work. No doubt his fans enjoyed the privilege of being “up close and intimate” while observing their hero in action on the set, and hopefully Tom Tyler felt the same way too.

Posted by TriggerTom at 3:20 PM No comments:

Throughout the year I make holiday card graphics with Tom Tyler and for this Easter, it is bright and colorful! Enjoy! 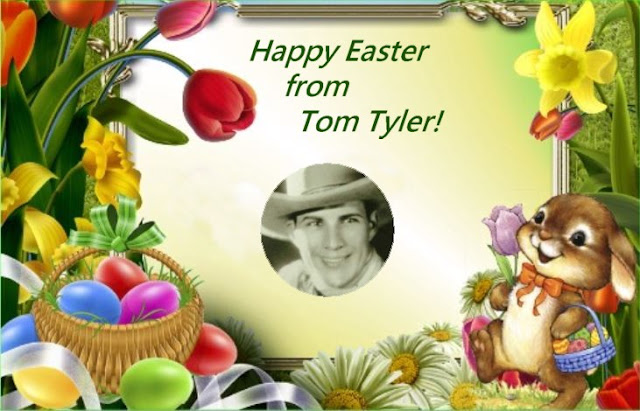 Posted by TriggerTom at 9:06 AM No comments:

The name Mitsuya Higa probably will not ring a bell with many Tom Tyler fans, although the circumstances which eventually led to Higa's uncle Rensuke and his family to arrive in the United States of America from Peru between 1942 and 1945 are timely enough, as they deal with the subject of deportation.

It may have been the appeal of American popular culture which led Higa's family – as well as his uncle's family – to be accepting of the Peruvian government paying for the the two Japanese families as a ticket out of the nation (during that time period, Peru had over 1771 Japanese nationals and descendents living in that country), even though they knew imprisonment awaited them, due to Franklin Delano Roosevelt's policy of Japanese living on American soil following Pearl Harbor. Mitsuya was a pre-teen boy, and living in the western hemisphere, became acquainted with the name Tom Tyler through western films, with his favorite being “Stagecoach.” Mitsuya even regarded Tom as a favorite hero, the latter's appeal transcending the boundaries of race and nationality. So as soon as the boy heard that Rensuke and his family were headed for Texas – not knowing the full meaning behind the trip – believed that he could finally see all the cowboys in America and meet his favorite cowboy, Tom Tyler. 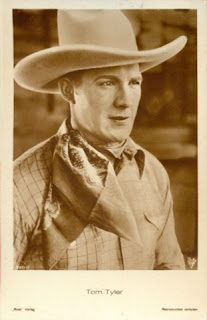 Mitsuya's father initially gave his son permission to leave Peru with Rensuke, but that was never meant to be; instead the boy remained in Peru with his family, maybe one day dreaming of visiting “the land of Tom Tyler” while his uncle remained in Texas. Yet Mitsuya Higa, as enamoured of the American Old West and cowboys as he was, grew up to become a toreador in Peru – the very first one of Japanese ancestry to do so. The entire article appears in Discover Nikkei and is worth reading.

Posted by TriggerTom at 4:36 PM No comments:

This blog entry is Tom Tyler related and deals with the rare disease he died from, scleroderma, also known as systemic sclerosis. One thing that distinguishes Tom's case from other Hollywood figures is that when he was diagnosed as being terminally ill, he did not have a voice for scleroderma, the way most Hollywood figures now do when they are diagnosed with a serious illness. Some advances for scleroderma have been made since 1954 when Tom Tyler died, although there is no cure yet nor a known cause, although it is believed that there are a number of factors that will result in an individual developing scleroderma, one which includes exposure to heavy metals. A recent study done on a connection between exposure to heavy metals and scleroderma which might explain why Tom Tyler developed the disease: a probability of either being exposed to the iron mines at Witherbee, New York as a boy, or when he had an accident on the set while filming “Idaho Red.” This accident led to his exposure of an overturned demijohn of chemicals used for realistic effects. Naturally it would be difficult to figure out the whys of Tom having scleroderma, we can only guess, but the good news is that some progress has been made, as well as developments in publicity in the medical field. 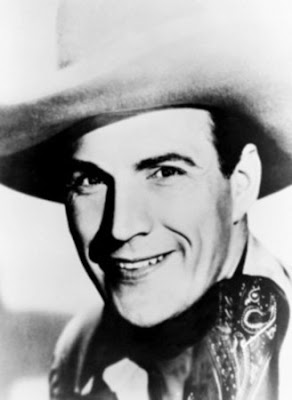 For example, as of 2016, a peer-reviewed academic medical journal dedicated to scleroderma began:
Journal of Scleroderma and Related Disorders (JSRD). The first issue was published during the first third of 2016 and profiled the artist Paul Klee who also had the disease. There is also a Systemic Sclerosis World Congress held since 2010 (the fifth one will be held in 2018; the congress meets once every two years). Scleroderma News has been around since 2013 and contains the latest news of the disease as well as tips for patients for easier living. And there is also the Scleroderma Foundation, Scleroderma Research Foundation, and the World Scleroderma Foundation. So in the past five years some major strides have been made, and by the time a cure is found for this disease, hopefully time travel will be possible too – because Tom Tyler deserves the cure for his illness.

Posted by TriggerTom at 10:07 AM No comments: