Did you know that Tom Tyler almost came close to starring in a film directed by Friedrich Wilhelm Murnau? An early documentation of this appeared in Hollywood Filmograph July 27, 1929, as part of the column titled “We Pictorially Present to You: A few personalities and some of the things they are doing.” There is a nice photo of Tom along with a caption (see below for the original clipping): 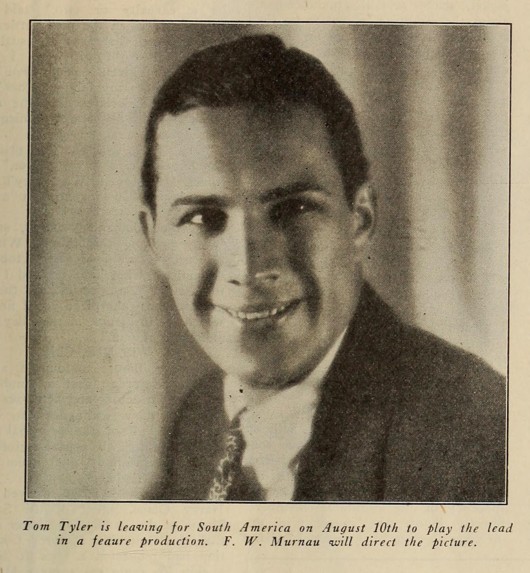 Some background research (which included speaking to another knowledgable Tom Tyler fan) revealed that Tom Tyler was indeed the original choice to portray the lead male in “Tabu: A Story of the South Seas” (1931) but then Murnau decided to go the purist route and hire all natives (with the exception of actress Anne Chevalier) for this critically acclaimed – and Oscar winning – silent film with a synchronized score. “Tabu” was in fact Murnau's final film so one cannot blame him for wanting to make his untimely exit from this world one of perfection. Still, I can easily imagine Tom as Matahi in a role like that, wearing a simple loincloth, portraying a Polynesian youth. Had he the opportunity to actually star in “Tabu”, there is no telling where Tom's career could have gotten him – but my guess is, most likely as an A-list star. For those of you interested in seeing “Tabu” in whole, it is available at Youtube.
Posted by TriggerTom at 3:46 PM