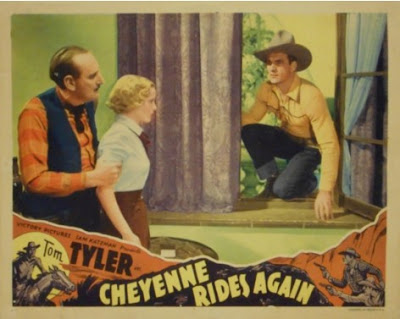 One of Tom Tyler’s more entertaining yet common athletic stunts in his starring roles involves climbing through windows. Most of the time it is to escape a band of crooks – or to avoid someone wanting to acquire information Tom has but is not ready to give out. Sometimes however, Tom climbs through a window to enter a house, not because the front door is locked, but in order to meet with someone in confidence, such as a girlfriend. In the latter case, Tom snuck into a house more than once just to do that, as he did in “Cheyenne Rides Again”, “The Laramie Kid”, and “Deadwood Pass”. When it came to escaping those who he knew were after him in a closed room, however, Tom took the easy route – climbing over the window sill when the window is open, most of the times by himself, sometimes with another person, as when he left the courtroom in “Fighting Hero” with Conchita in order to protect her from a frame-up job.


Most fascinating, however, are Tom’s projectile jumps through closed windows. This is evident in movies like “Single Handed Saunders”, “Phantom of the Range” (1936), and “Cheyenne Rides Again”, and for the viewer who has seen “Adventures of Captain Marvel”, will find that Tom Tyler did in fact have lots of practice performing such stunts, even though Republic Pictures stuntman David Sharpe executed all of the tumbling stunts in this famous film serial. In some cases, Tom performs a simple jump through a closed window, as in “Two Fisted Justice”.


While climbing or projectile jumping through windows sounds easy, Tom Tyler certainly makes these stunts look effortless enough to amuse the viewer and never getting hurt in the process. Still, as they say, “Don’t try this at home” - leave it to professionals like Tom Tyler. 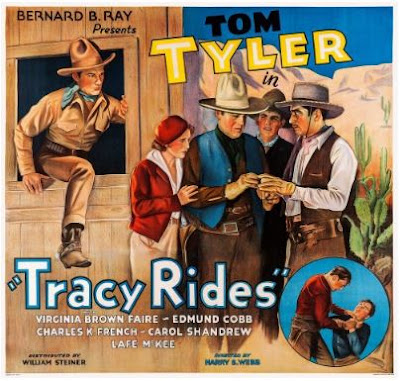 Posted by TriggerTom at 8:16 AM