Seeking an angel donor for “The Man from New Mexico”

Aventuras de Tom Tyler is seeking an angel donor for the restoration of "The Man from New Mexico", released in 1932. This is a complete 35mm Monogram Pictures film which has not been seen since its release in almost 90 years and has in fact been considered one of Tom's "lost films" for many years. If you know of someone who is interested in helping preserve Tom Tyler’s film history for a future DVD release, please spread the word. The time has come to help make this happen.

For further details, please contact me at: aventurasdetomtyler_@_triggertom.com (remove the underscores). A huge thank you to anyone who can help with this project! 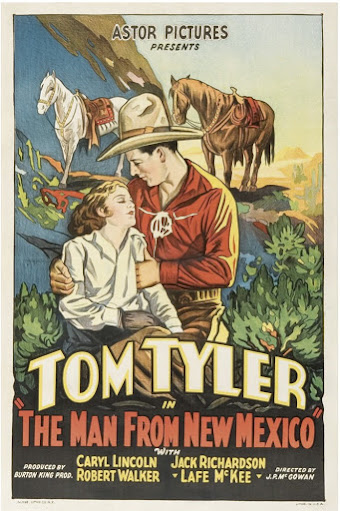 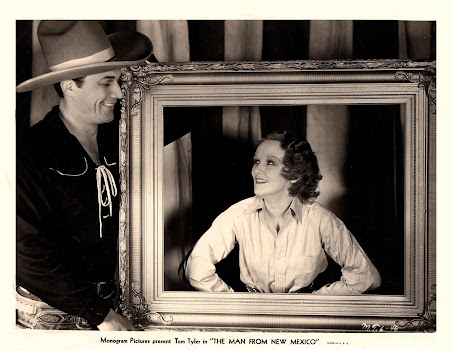 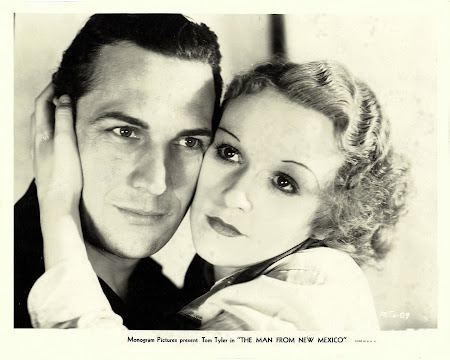 Posted by TriggerTom at 2:21 PM No comments: 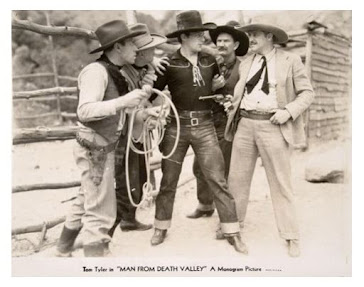 The title of this article sounds like that is how the Los Angeles Evening Citizen News released this rather shocking news item on August 3, 1931, only days before Tom Tyler’s 28th birthday. This notice was actually a second paragraph in a rather brief release about a man from Glendale, California, getting injured during a polo game at the Hollywood Polo Club in North Hollywood. Considering the date range of his filming schedule, it appears that Tom Tyler’s unfortunate shooting accident took place while filming “The Man from Death Valley”, a lost Monogram film. Luckily for Tom, the shooting was not from a disgruntled actor, cameraman nor director, but from Tom’s own hand.

It seems that while Tom was on horseback in high-speed pursuit he reached for his gun to shoot at someone but instead accidentally discharged the gun, resulting in the gun’s blank going into his thigh. The painful incident placed a temporary hold on filming and a trip to the hospital where Tom received prompt medical treatment for the injury. By the time Tom was back on his feet, he was able to complete filming this action-packed western. 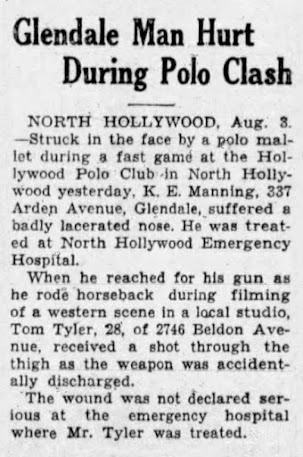 Posted by TriggerTom at 4:57 PM No comments: 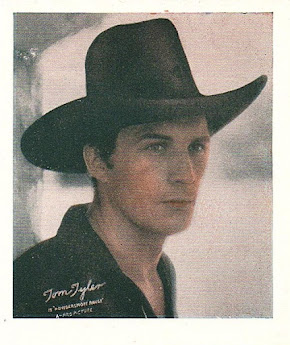 One of the rarer Tom Tyler collectible color movie cards is from the R96-3 set, issued around 1938 or 1939. These cards were originally issued as panels or sheets measuring 6" x 8" containing six different stars in two rows of three, often with a film genre for each panel. For the R96-3 panel that contains a full-color photo of Tom Tyler as Sundown Saunders from “Powdersmoke Range” (1935), the theme is western stars. There are a minimum of seventeen known different panels of Hollywood stars on them. When cut from the panels, each card measures 2 ½” x 3 1/8” in size. The backs of the cards are blank with no identifying manufacturer. At least 64 cards in the set were issued, and some of the cards printed appear on more than one panel, or as duplicates in the set. Other Hollywood star who appeared in the R96-3 series include William Boyd, Hoot Gibson, Buck Jones, Dean Jagger, and Sally Payne.

Posted by TriggerTom at 5:10 PM No comments:

Inviting the Children to the Circus 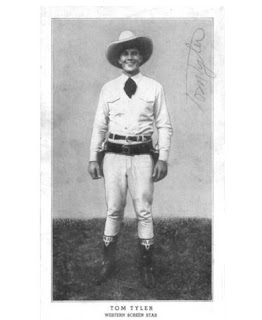 One of Tom Tyler’s favorite means of giving back to his community was meeting children from community homes, or orphanages, as they were also called back in the early twentieth century. Whenever Tom visited his hometown of Hamtramck, Michigan during studio vacation time, he would stop by St. Ann’s Community House and chat with the youth who stayed there. According to “The Tom Tyler Story” by Mike Chapman, Tom would also share meals with the excited children who frequently patronized his westerns at the local movie house. Naturally, these events included entertainment, which help raise money for St. Ann’s. However, this is just one example of Tom’s generosity towards children. During 1937, the year he took a break from his acting career to tour nationwide with Wallace Brothers Circus. Tom requested his personal representative to check for local orphanages in cities where he would be appearing and offer to invite the children in these homes to come see him perform. One such orphanage was Bethany Home in Rock Island, Illinois.

Bethany Home was located in the former Gilpin Moore House, a beautiful historical home built in the French Second Empire architectural style. An orphanage since 1906, orphaned children lived in this particular house until Bethany moved to a new location in 1941. When Nellie Seiler, the superintendent of Bethany House made the announcement of Tom Tyler appearing with Wallace Brothers Circus to the resident children, they were excited to go see their hero perform live in person. According to The Rock Island Argus dated July 26, 1937, Tom is quoted as having said: “I am having the thrilling time of my life traveling around the nation meeting all the boys and girls in person. Many of these have written mail to my Hollywood address at one time or another.”

The trip alone to the circus must have been filled with laughs and shouts of delight as the members of Bethany Home boarded the Tri-City Railway train all the way to Moline, Illinois, where Tom was to appear. By the time the boys and girls took their seats at the circus, Tom made his entrance in the center of the ring, welcoming them all for coming to see his exuberant performance. With Tom and his entourage of cowboys, cowgirls and Indians, the fast paced entertainment was a lifetime event to remember and pass down to their families for generations after. 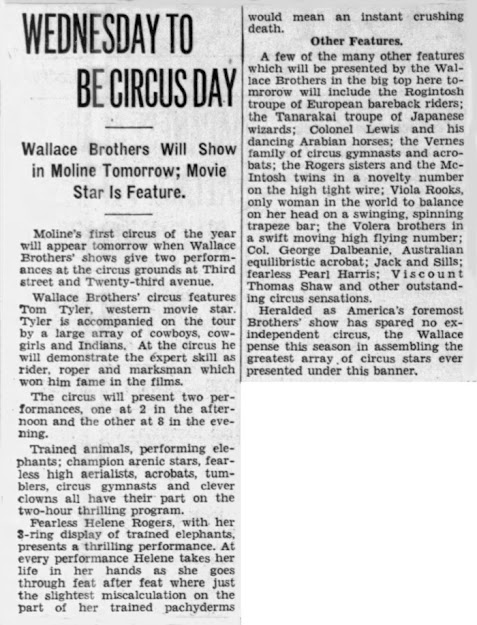 Posted by TriggerTom at 2:31 PM No comments: 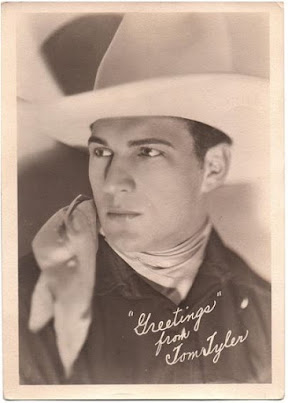 As Aventuras de Tom Tyler enters its seventh year of operation from its rather modest start back in January 2015 – and plenty of attention from fans around the globe, some new projects regarding Tom Tyler are planned for 2021 (originally for 2020 before the pandemic took a substantial chunk out of the year). The quarantined time allowed me to give attention to Tom’s lost film search, communicate with his biographer Mike Chapman, as well as his nephew Ray Slepski. I will be forever grateful for the privilege of speaking with Tom’s family and sharing in some fabulous memories of Tom at the height of his career.

For the regular visitors to the website, chances are you’ve already noticed the homepage is updated. I also plan on translating more Spanish film booklets to English like the recent “Red Hot Hoofs” (1926) as time permits.

I do want to thank everyone for their support, including all Tom Tyler fans on social media, regular blog readers and site visitors. Let’s make the year 2021 the best one for Tom Tyler yet!

Posted by TriggerTom at 2:19 PM No comments: Tom Tyler was almost always billed as Tom during his 1930’s B-westerns, but one popular recurring character is Tom Wade, officer of the Cattlemen’s Protective Association. Wade would receive his assignments from headquarters before jumping on horseback and with a partner on horseback too, head to the ranch where a cattle rustling complaint was filed. Along with the character of Tom Wade, sometimes he bore the nickname of Cheyenne Tommy, a suitable moniker for one of the top cowboys of the 1930’s B-westerns. Tom Tyler’s Tom Wade/Cheyenne Tommy appeared in “Lost Ranch”, “Brothers of the West”, “Orphan of the Pecos”, “Mystery Range”, “The Feud of the Trail”, and “Cheyenne Rides Again”, all released in 1937. Tom Tyler was not the first western star to be tagged a Cheyenne cowboy, however.
Harry Carey was Cheyenne Harry in 27 silent film westerns from 1916 to 1919 in a total of 27 westerns which remained quite a popular franchise during its four-year period. Some of these silent films were "A Knight of the Range" (1916), "The Ban Man of Cheyenne" (1917), "The Drifter" (1917), and “A Fight for Love” (1919). In fact, the nickname Cheyenne was so popular with Harry Carey’s onscreen cowboy that sometimes he was solely billed as “Cayena” in Spain where many of his silent film westerns were released – Cayena being the Spanish version of Cheyenne.

Nicknames aside, what exactly constituted a Cheyenne cowboy on the silver screen when it came to Tom and Harry? Being fully human, virile, honest, genuine, someone who audiences can relate to, and fully appreciate their onscreen hero. In other words, being the consummate cowboy. Not only did Harry Carey embody all these qualities, but so did Tom Tyler, making him one of the most popular western stars of the 1930’s.

Posted by TriggerTom at 4:20 PM No comments:

Warning: The following article contains a graphic description and photo of a production company fire which involves Tom Tyler, the rest of the cast and film crew for “Mystery Range”, a 1937 Victory Pictures B-western.

Filming B-westerns in the 1930’s may have seemed like a lot of hard work yet fun for Tom Tyler, the final result offering his viewing audience plenty of excitement and thrills. In June of 1937, however, Tom had a very close call with death – along with other members of the cast and film crew – during the making of one film which almost ended his career. 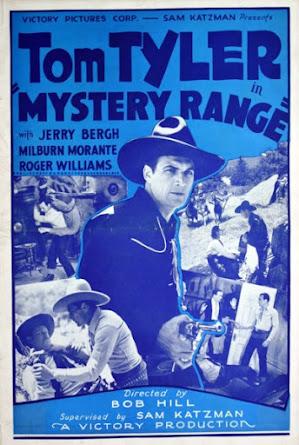 After the troupe returned from filming on location in Chatsworth, California, the final wrap up for “Mystery Range” needed to be done at the production company, Victory Pictures. Tom, his leading lady Jerry Bergh, director Bob Hill, plus twenty-two other actors and film technicians, were trapped inside the production company building when a fire broke out in the property room.  The fire quickly spread throughout the rest of the wood building, located at 9077 Venice Boulevard in Culver City, California. Additionally, the scene dock and generator rooms were also destroyed from the fire, which quickly spread around the perimeter of the building, blocking all exits inside.

According to The San Francisco Examiner dated June 7, 1937, a “sudden shift of wind” allowed one viable exit for everyone to safely escape. Luckily no one was hurt, and the movie cameras and office equipment rescued from certain loss from the stucco office building – equipment of high value to the film makers and actors, so that their work was saved. Firefighters from Culver City, Los Angeles, and Santa Monica were called to arrive as quickly as possible to put out the massive fire. The firefighters also had to search the burned-out remains for any possible victims but the good news was, there were none.

The entire film studio sustained damages to the tune of $50,000.00 (the original estimate was $25,000.00) – or $904,125.00 in the year 2020 – close to a million dollar loss. As for Victory Pictures producer Sam Katzman, he could not resume making films due to the loss of his movie studio. All final work on Tom’s successive films made for Victory Pictures in 1937 – “Orphan of the Pecos”, “Brothers of the West”, and “Lost Ranch” – were successfully completed and released in movie houses across the nation.

Victory Pictures studio was located in the old Foy Studios building. Bryan Foy purchased what was the Sunset Studios building in Culver City back in 1931. Famously known as being one of the seven Foy siblings, Bryan was a successful movie producer and director whose career dates back to the silent film era.

At some point between the fire of June 1937 and December of that year, the former Victory Pictures building was in the process of being rebuilt as a dramatic school. Unfortunately, the building was to experience another, and far more devastating fire in January 1938. According to The Los Angeles Times, January 17, 1938, the fire was caused by “spontaneous combustion”. It is probable that 35mm nitrate was stored at Victory Pictures under a circumstance that would in fact cause spontaneous combustion. To make matters worse, power lines fell, altogether, a total of four explosions was heard by everyone in the surrounding area. Unlike the fire that took place in June 1937, no one was in the old building during the second fire, which caused a total of $100,000.00 (in 2020 dollars, $1,846,723.40) in damage. At the present, a Chase Bank is located near where the Victory Pictures production formerly stood.

Posted by TriggerTom at 2:47 PM No comments: