Say it isn’t so: Censorship in “The Law of the Plains”

It would be difficult for the modern Tom Tyler fan to consider the case of censorship, or even the need for it, in one of his starring roles movies. What might be an even bigger challenge is to think it could happen in one of Tom’s later silent films made for Syndicate Pictures – yet it did, and Bell Pictures Inc., the distributor (New York City), was forced to remove a few frames from the final print of “The Law of the Plains”, released in 1929. 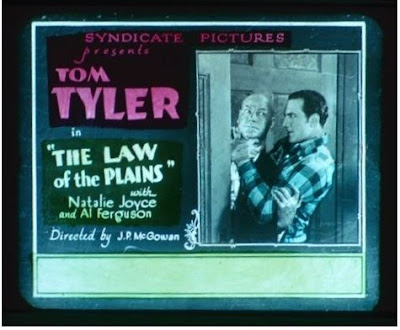 “The Law of the Plains” is the only Syndicate Pictures silent film on which there is scant information; next to nothing at Lantern Media History, and a bare mention in major newspapers outside of cast members and very brief plot description. In fact, Natalie Joyce, Tom’s leading lady in the movie, is not given a character name, not even at IMDB. Consequently, composing the story line for “The Law of the Plains” page of Aventuras de Tom Tyler proved to be the most challenging of all Tom Tyler silent films, most of which have a wealth of information on them, including the many lost silent films he starred in. A routine inquiry was sent to the Library of Congress about plot information, and they were extremely accommodating and helpful, even leading me to put an inquiry at the New York State Archives, which holds many records on silent films – and “The Law of the Plains” happened to be one of them. Upon the recent receipt of a photocopy of the record for this silent film, some rather interesting information was included, a tidbit that would make a fantastic piece of trivia among Tom Tyler fans and later 1920’s silent film western fans.

It seems that upon the final screening of “The Law of the Plains” by the State of New York Education Department, Motion Picture Division, which granted exhibition licenses (a license to show the movie at cinemas) a request was made to Bell Pictures Inc. to remove the frame from the first reel of the film where Limpy (possibly, Al Ferguson, who is referred to a “Gang Leader” at IMDB) swats at a fly which landed on his face – and utters a curse word. There is no reference to the actual curse word in the photocopy record, aptly labeled as “Indecent”; unfortunately, neither is there a mention of all cast members and their characters, outside of Tom Tyler being mentioned. Since Tom’s silent film westerns have always been considered family- and children-friendly, any lip movements that mimic a curse word had to be removed. Once this change was made, the film reel was sent back for review by the examiners at the Motion Picture Division and declared appropriate for exhibition.

Obviously no one would be able to see the Limpy character make the curse word in “The Law of the Plains” but not because the film does not exist; four of the five reels are at the Library of Congress, and one of those happens to be the first reel – the reel designated as needing a modification before the film could be granted a license for exhibition at cinemas across the United States. Hopefully, “The Law of the Plains” will seek restoration within the next few years.

A huge thank you to the New York State Archives in Albany for their help in providing the above information FOC (free of charge), and of course the Library of Congress, who has always been a pleasure to deal with when it comes to my research of Tom Tyler and his work.