Profiled in Classic Images June 1984, Tom Tyler receives a favorable evaluation as a Hollywood leading man, but not just for his acting skills; his personality and lifestyle is described by writer George A. Katchmer as being a role model for American youth to aspire to. One notable aspect of this article, “Tom Tyler: clean cut hero”, combines Tom's real life background with studio composed biographies, embellished as it were, to make it seem like he had an exciting upbringing and an adventurous streak which made Tom fit in his FBO western hero-type roles perfectly.

For example, a number of sources claim that Tom Tyler worked as a coal miner near Pittsburgh, spent time at sea on a steamer, worked as a lumberjack, and as a prizefighter. In retrospect, such roles might not be hard to imagine of Tom, considering the fact he has played a lumberjack (“Riders of the Timberline”) and a prizefighter (“Red Hot Hoofs”, “Rip Roarin' Buckaroo”) and was on a passenger ship (“King of Alcatraz”) at least. Of course none of the studio embellished stories have been substantiated, although there is a strong possibility that he did work as an art model, according to “The Tom Tyler Story” by Mike Chapman. Tom no doubt knew how to pose – in fact during the height of his weightlifting career he posed as a model for Milo barbells in the 1920's. During his first years in Hollywood though Tom had to find a place to live, and eat too, so he was willing to find any kind of work, whether or not it directly led him into acting jobs. Considering Tom Tyler's looks and physique, it is not difficult to imagine him working as an art model.

The Classic Images article also documents Tom's desire to become an actor as a teen, receiving support from his two sisters but not his parents, who thought he was wasting his hard-earned money and time on a dream that seemed totally out of reach for the working-class Markowski family. Employed at the auto factory in Detroit, Tom's father preferred that his son follow in his footsteps and bring home a steady paycheck, having some means to support himself as well as a future wife and children (Tom was briefly married to actress Jean Martel, no children). Katchmer further details Tom's childhood and education. There are no details about Tom's education years although it is safe to guess he was a good student, a quiet boy who brought home decent grades on his report card. Comparing Tom Tyler's education years to A-list stars like Errol Flynn or Lee Marvin would be interesting, for it seems like such actors have had trouble in school, even being expelled at some point. Yet Tom, mild mannered as he was, was smart despite having only a high school education, and he was clearly in control of his destiny. 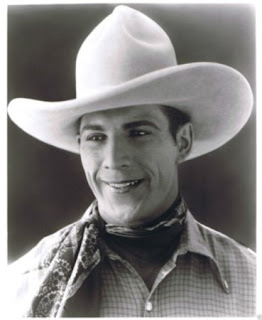 Regarding Tom's personality and lifestyle, the latter being atypical of Hollywood leading men, Katchmer explains why Tom Tyler is an ideal role model for American youth. He mentions that Tom was probably a moderate drinker and smoker (there are a few existing photos of Tom holding a lit cigarette; chances are he liked a cold beer or a glass of wine with his sirloin steak, one of his favorite dishes) and not his name emblazoned across the front page of the newspapers about some scandal on a daily basis. At the same time Katchmer notes that Tom was no saint, as none of us are. Tom's shyness possibly protected him from the toxic side of Hollywood, although it might also be considered that Tom believed in making it in Hollywood on his own talents, based on merit. Regardless of what stories surround Tom Tyler's background and career, this issue of Classic Images is worth seeking out and reading.

Posted by TriggerTom at 3:50 PM