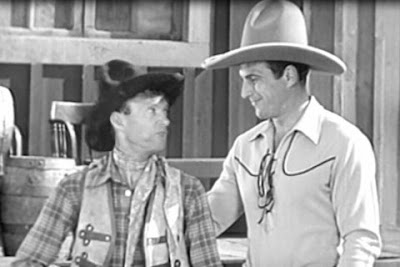 One of Tom Tyler's most underrated onscreen partners during his Reliable years in the 1930's was Al St. John. Frequently billed as Al “Fuzzy” St. John, Al was a star in his own right dating back to his years in vaudeville. A natural comic talent – he got into the film business in 1912, and his acrobatic talent proved to be an asset in silent films – Al appeared in many a B-western, including “Trail Dust” (1936), “The Fighting Deputy” (1937), “Shadows of Death” (1945), and many others. He made two films with Tom Tyler, “Trigger Tom” (1935), and “Pinto Rustlers” (1936). Even though Al was born in 1893, he hardly looked ten years older than Tom Tyler. Yet the two actors complemented each other in a way that Tom's other film partners did not. To start with, Al St. John shorter than Tom, but he was attractive, blue eyes, blonde, thin yet had a muscular “tough guy” appearance about him, complementing Tom Tyler's dark good looks and physical appearance quite nicely.

In “Trigger Tom”, Al is Stub Macey, who meets Tom in an unlikely manner: after being thrown out of a saloon, somersaulting down the steps, for owing another man money. Tom is of course looking for Stub to offer him a job, and in the process takes care of his new pal's debt, and they go off on their mission. Tom plans on buying cattle from a rancher (John Elliott) after receiving an offer to do so, but runs into trouble when he discovers an outlaw named Mose Jeckyl (William Gould) controls the sale and price of the cattle in the region, regardless of who owns them. Stub helps Tom achieve his mission, even when Tom falls in love with Dorothy (Bernadine Hayes) the lady of the cattle ranch. 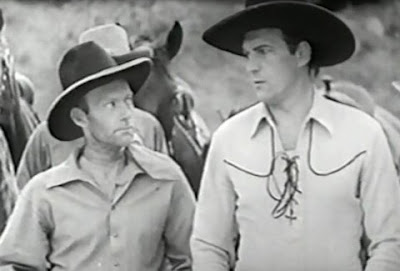 In “Pinto Rustlers” Al is Mack, paired with Tom by the inspector (William Gould) in order to put an end to a gang of local horse rustlers. Once the inspector tests Tom to find out if he is man enough for the job (he belts Tom after talking him down), Mack speaks up and tells Tom that he is his pal for life, doing what he has wanted to do to his boss for quite some time. As Mack, Al acts as lookout for Tom while the latter infiltrates the gang of horse thieves to establish justice for a pinto owner who was shot dead. Al does not have as much onscreen time in this movie as he does in “Trigger Tom” but still plays an important role. For example, Mack has to fake being another rustler named Lugo but is eventually caught in the act. With both Tom and Mack temporarily incapacitated – they end up being tied together by rope – Tom breaks free, and continues to pin down the rustlers. Mack is also handy as a safecracker, and breaks open a safe where Tom removes a sum of money and hides it in a piano lid. Al St. John probably could have benefited from more air time in “Pinto Rustlers” alongside Tom, and even though thse two distinguished actors made only two movies together, they certainly had the potential for more films as a semi-permanent team. They not only looked great together, but their acting talents were on a par with each other, which makes them so enjoyable to watch together.
Posted by TriggerTom at 3:25 PM