Betty Grable with Tom Tyler – and remakes of “Galloping Thru” 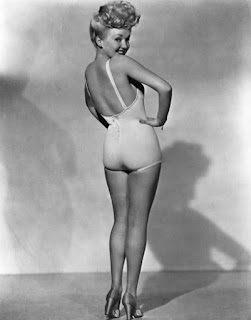 The name Betty Grable hardly needs any introduction to those familiar with Hollywood’s Golden Age. While her popularity was at its height during the 1940’s and 1950’s, prior to those two decades her film appearances were confined to B-movies. One of these low-budget movies Betty was originally slated to appear in was “Galloping Thru” – with Tom Tyler as her leading man, as stated by the author Michael R. Pitts in his book "Astor Pictures: A Filmography and History of the Reissue King, 1933-1965”. On the surface this does not sound so far-fetched; Tom himself was the first choice to play the lead role in F. W. Murnau’s 1931 epic film “Tabu: A Story of the South Seas”.  That never happened, and as fate would have it, Betty Grable would never have the chance to play opposite Tom although her looks, charm and personality were certainly a match for his. There was a reason Betty was called “The Pin-Up Girl” in the 1940’s, that familiar pose of her showing off her legs, wearing a swimsuit that became a ubiquitous image during World War 2. Matched with a weightlifting champion by the name of Tom Tyler, such a pairing might have opened the door to more movies for both stars, possibly even A-list movies, at least sooner for Betty. 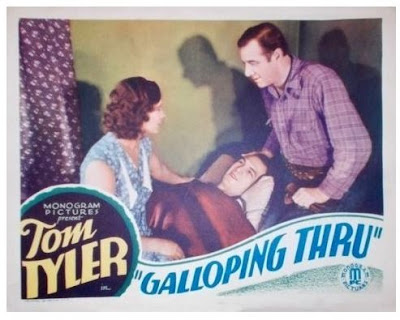 After Betty died in 1973 at the age of 56, a number of movie contracts both signed and unsigned survived and were eventually put up for auction. One of the unsigned contracts was for Trem Carr Pictures, which produced the Tom Tyler Monogram movies of the early 1930’s. One of these movies was “Galloping Thru”, but the contract stipulated that she was to use her first stage name of Francis Dean. Betty Grable never signed the contract, perhaps in the hope her next role might be in an A-list movie. That however did not happen until 1940 when she replaced actress Alice Faye in “Down Argentine Way”, finally establishing herself as an A-list actress with Twentieth Century Fox studio, becoming their biggest – and highest paid – star by 1947. While Betty Grable did not have the opportunity to play opposite Tom Tyler, Betty Mack did. The second Betty worked with Tom before, playing his leading lady in “God’s Country and the Man”, “Partners of the Trail”, and “The Man from Death Valley”, all released in 1931. Astor Pictures re-released "Galloping Thru" in 1939, eight years after its initial release by Monogram Pictures. 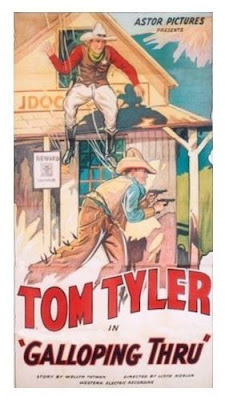 Movie remakes in Hollywood is hardly a new trend; the practice dates back to silent film years. Tom Tyler’s earliest movie remake of the sound era is “Terror of the Plains” (1934) – remade from “West of Cheyenne” (1931), his first feature-length sound movie. The second remake was “Coyote Trails” (1935), from “Ridin’ Thru” (1934), minus the element of the dude ranch in the plot. The Monogram movie “Galloping Thru” has its share of remakes too, but has a double lineage, depending upon the plot elements being counted, as well as the documenting sources. The history of remakes of “Galloping Thru” as listed here come from the book "Becoming John Wayne: The Early Westerns of a Screen Icon, 1930-1939” By Larry Powell, Jonathan H. Amsbary, and from IMDB. The John Wayne book has “Galloping Thru” being remade three times; IMDB, two times. What makes the two lineages really interesting is this: there are a total of five different writers involved with these remakes, creating minor variations in the story without disturbing the main story elements which qualify as a remake.

IMDB remake lineage of “Galloping Thru”:

Note how IMDB places “Galloping Thru” second in the history of its remakes – after “A Son of the Plains”, written by Robert N. Bradbury. Bradbury also directed “A Son of the Plains”, “Blue Steel”, and “The Dawn Rider”. Lloyd Nosler, who directed “Galloping Thru”, also wrote the story for “The Dawn Rider”. It sounds like both Nosler and Bradbury had a hand in establishing a solid enough basic western plot that would be repeated up to the present day. It is gratifying to see a Tom Tyler B-film leading a series of remakes like this, even if the behind-the-scenes names are responsible for the “heavy lifting”. "Galloping Thru" remains a lost film.