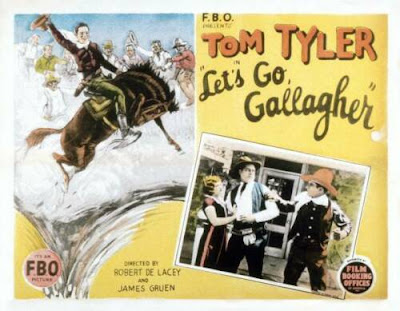 It has been some time since an article has been written about the global reach of Tom Tyler’s silent films and talkies, so for this one, we will go to Malaysia and Singapore. These two countries in Southeast Asia saw the majority of Tom’s earliest silent films, beginning with “Let’s Go Gallagher” (1925) during the later half of the 1920’s. Since Tom Tyler’s movies retained their original American English titles (Malaysia, then called Malaya, remained under England’s control until 1957; Singapore, until 1959), it is probably safe to guess that his movies were targeted towards the British, and Malays and Singaporeans who could understand English. 1927 seems to be the last year of Tom Tyler’s silent films for FBO that were released in Malaysia and Singapore, “The Desert Pirate” being the last one, although the Syndicate Pictures produced “The Lone Horseman” was the last silent film from the 1920’s to be exhibited in those two countries. “The Canyon of Missing Men” (1930) was the very last of his silent films to be shown in 1933.

The marketing of Tom’s silent films in cinema listings was no less exciting or intriguing as they were in American newspapers. For example, “The Wyoming Wildcat” (1925) listing for Surina Theatre in The Straits Times (December 3, 1927) reads: “The very latest rage of filmdom, a champion in every sense of the word, a horseman who brings memories of Buffalo and Pawnee Bill, a crack shot of uncanny skill.” “The Cowboy Cop”  (1926) listing for Surina Theatre in Malaya Tribune, February 17, 1928, has: “A roaring melodrama of Cowboy Life on plains and boulevards, packed with Typical Tyler Thrills.” “Tom and His Pals” (1926), also at Surina Theatre describes the silent film as being “The comedy-action gang of the west, the most popular trio in the world” in Malaya Tribune, May 18, 1928.

By the 1930’s, a number of Tom’s talkies made it to the other side of the world, in addition to his film serials. Cinema listings in the Malaya and Singapore newspapers for the film serials were a bit of an aberration, however. Instead of just one serial chapter being shown along with a feature film and cartoon, a handful of chapters were shown together in one night, and on occasion, the entire serial was shown. That meant a full three to three and a half hours of sitting through the serial, with at least one intermission. This was the case with Tom’s Universal serial, “Phantom of the Air”. The cinema listing for Empire Talkies from Morning Tribune (June 26, 1936) has: “7:30 PM To-night one show only: Complete serial ‘Phantom of the Air’ 12 chapters 24 reels Featuring Tom Tyler.” “Jungle Mystery” (1932) was shown at the Ritz Cinema in Geylang, all 12 chapters at once, according to Malaya Tribune, August 3, 1934. It is unknown why the cinema showed the entire serial all at once; it is possible the cinema was leasing the movie for a week or less, thus forcing them to show the entire serial the way they did. At any rate, these film serial listings remain a curiosity in the world of film serials.

A number of Tom Tyler 1940’s movies were also exhibited in Malaysia and Singapore. “The Mummy’s Hand” (1941) was advertised as being “The most exciting thriller since ‘Frankenstein’!” at Capitol Theatre (The Singapore Free Press and Mercantile Advertiser, 19 March 1941). "Into a tomb of a thousand terrors...Daring a terrible curse to come face to face with the world's most amazing monster!"

These newspapers as mentioned above were published in British English. With thanks to NewspaperSG  for these Tom Tyler movie listings.

Posted by TriggerTom at 8:18 AM