Need help in identifying a Tom Tyler movie with a French title - Identified!

Updated note (January 26, 2020): It appears the newspaper Republican and Herald (Pottsville, PA, January 25, 1930) mislabeled a still similar to the one below as being from "The Phantom Rider".  Fellow forum member Vince at forum.westernmovies.fr sent me several scans from a film booklet, Les Films du Far-West which contains the still identical to the one below. The title on this is "Le Vol du Diamant", which leads me to believe "'Neath Western Skies" had two different translations in French - the other one being "Le Lion du Ranch". Literally, "Le Vol du Diamant" means "The Flight of the Diamond", and diamond drills are the central part of the plot in "'Neath Western Skies". Many thanks to Vince for this information!
~~~~~~~~~~~~~

Back in November 26, 2017 I did a blog article on French titles of Tom's movies. However one of the translations turned out to be inaccurate. The cinema listing for “Le lion du ranch" appeared in the newspaper L'Echo d'Alger, January 20, 1932:

After some initial inquiry at forum.westernmovies.fr, it was originally concluded by me it was probably “West of Cheyenne” (1931). However, that is not the case. Another member at the above named French forum shared a still of “Le lion du ranch" which was published in the book  “Le Western ou le Cinéma Américain par Excellence” by J L Rieupeyrout and A. Bazin, 1953. Please take a look at the still below and see if you can recognize which Tom Tyler movie this is from. The date of the movie is most likely 1931, which means it is one of Tom's lost talkies. Please email your reply to aventurasdetomtyler_@_triggertom.com (remove the underscores). Many thanks to Vince at  forum.westernmovies.fr for sharing this image! 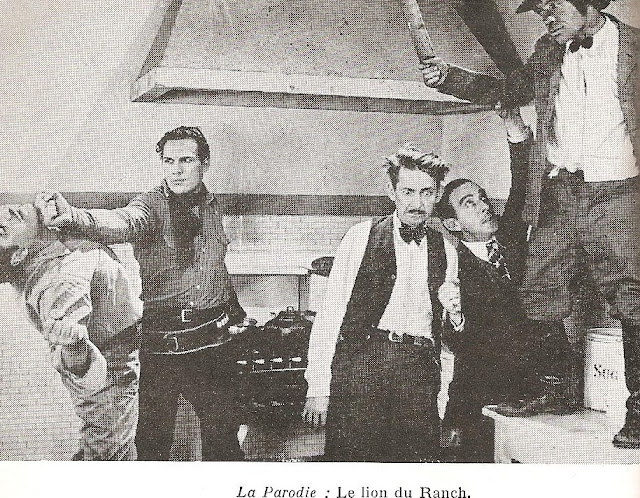 Posted by TriggerTom at 3:05 PM