From the American West to the Unknown: A review of “Weird Western” 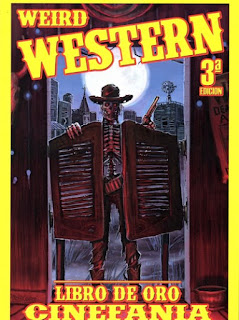 The basic story elements of a western film – the land, the cowboy hero, and bad men – can allow for variations that extend to the realms of the imagination. It is not surprising then that westerns often implement elements from other genres and cultures in the story, a practice which dates back to the early years of silent film. These elements often add spice and excitement to the story, which by itself may otherwise seem repetitive to the regular cinema patron of westerns.

“Weird Western” from Cinefania is much more than a reference book on westerns of this type; it provides a wealth of information for movie trivia and general film discussion. Weird is not always strange, in this case, but rather pertains to these crossover elements blended into the red and purple mountains of the western landscape, with the prairies holding as much action as a hidden cave. 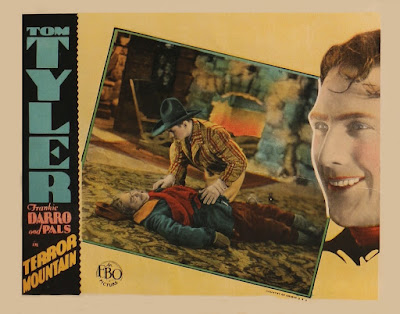 “Terror Mountain” includes gangsters in a snowy setting at Big Bear Mountains near Los Angeles, while “Tyrant of Red Gulch” has a band of Russian bad men operating out of a cave hidden in the Rockies. “Phantom of the Range” contains some interesting elements such as a supposed real ghost protecting the Hiram Moore, a treasure map hidden in the painting of Hiram, a female spy doubling as a housekeeper, and an estate auction. “Orphan of the Pecos” can lay claim to being one of very few westerns which has a snake-oil salesman who also happens to be a ventriloquist – the ventriloquist element no doubt being borrowed from Edgar Bergen, Hollywood’s most famous ventriloquist of the 1930’s to 1950, before he made his mark in television thereon. The Three Mesquiteers movie “The Phantom Plainsmen” has Nazis, a Captain Marvin who owns a ranch in Wyoming, Marvin’s son Tad who is studying medicine in Germany, and enough intrigue to make it a noir western.

There are many other notable westerns of interest in “Weird Western” with big-name stars of their own eras: “Where Is This West?” (1923) with Jack Hoxie; “The Winking Idol” (1926), a film serial with William Desmond; “Gold Ghost” (1934) with Buster Keaton; “Border Phantom” (1937) with Bob Steele, and many others. The chapter of Weird Westerns on Television contain some surprising inclusions. The long-running western show “Bonanza” was known to explore unusual themes and elements, as seen in the episodes “Hoss and the Leprechaun” (1963)  and “Twilight Town” (1963). The series “The Wild Wild West” (1965 to 1969) starring Robert Conrad and Ross Martin, which successfully blended the western and science fiction genres to create steampunk, merits two pages in “Weird Western”.

The chapter on Canonical Westerns include movies that seem outlandish by their titles and plots but retain cult followings, such as “Billy the Kid Versus Dracula” (1966). In this movie, John Carradine plays Dracula, while Chuck Courtney is Billy the Kid. Of course, Frankenstein has to have his own western too, and does, in “Jesse James Meets Frankenstein’s Daughter” (1966), with John Lupton as Jesse, and Narda Onyx as Dr. Maria Frankenstein. For the Weird 21st Century Westerns, “Jonah Hex” (2010), “Cowboys and Aliens” (2011),   and “Bone Tomahawk” (2015) are covered, among others.

Each entry for these and the other films mention the director, production company, date of release, main stars, and a description of what makes these westerns so far from the usual wagon trails. Full-color movie posters of all sizes plus black and white posters and film stills make this a highly readable Spanish language film book.

Many thanks to Dario Lavia for including the blog article “Lost in Translation: How ‘Tyrant of Red Gulch’ became ‘The Sorcerer’ across the pond” as a reference in his film entry for “Tyrant of Red Gulch” in “Weird Western” 3rd Edition.

To order a copy of “Weird Western”, go to:

Posted by TriggerTom at 3:25 PM