Collectibles: Tom Tyler on the Cacao and Chocolate Kivou postcard 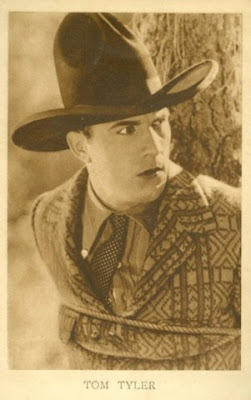 Tom Tyler appeared on a number of collectible European-made movie star cards, but one of the harder-to-find ones is the Cacao and Chocolate Kivou postcard. These postcards, manufactured in Vilvoorde, Belgium, were distributed with chocolates, in at least three different sets. These sets were unnumbered, but bore certain distinct characteristics. One series had the company trademark symbol in the lower right or left corner at the photo of the movie star plus production company name. A second series had only the production company name, while the third series had just the star’s name on the card along the bottom. The Tom Tyler card falls into the last category. Notably, the image of Tom used for the postcard is from his 1928 silent film, “Terror Mountain”. The Kivou postcards measured 3 1/2” x 5 1/2” in size, with a sepia tone for each movie star photo. Other stars who appeared on these postcards include: Françoise Rozay, Marion Davies, Jenny Jugo, Blanche Montel, Fernand Fabre, and Daniela  Parola.

The Cacao and Chocolate Kivou company began in 1929 but was dissolved in 1933, being in existence for only five years. Movie star postcards started being issued around 1930, having both European and Hollywood stars on the front of the card. Due to the rarity of these movie cards on the American market (auction sites, etc), the majority of Cacao and Chocolate Kivou postcards are available for purchase directly from European auction sites.

Posted by TriggerTom at 5:25 PM