Filmed on location at Warner Springs: “The Texas Tornado”

As the only Tom Tyler FBO silent film available on DVD, “The Texas Tornado” may surprise viewers in that it was filmed on location in Warner Springs, California. Located in San Diego County, Warner Springs is an unincorporated community that was home to the Luiseño and Cupeño tribes in southern California. Related to the Cahuilla tribe, a now-abandoned Cupeño village sits on 200 acres east of Lake Henshaw on California State Highway 79. The Cupeño lived in the San Jose Valley Mountains by the San Luis Rey River, and had two villages, one at present-day Warner Springs, the second, at Wilakal, at San Ysidro. Founded in 1844 by Juan Jose Warner, this piece of land is situated at an elevation of 3130 feet, with a smattering of mountains referred to as Lost Valley, part of the Peninsular Ranges in the state. Of these mountains, Hot Springs Mountain, famous for its scenic and beautiful hiking trails, has an elevation of 6535 feet high and is the highest peak in San Diego County. Since 1912, Hot Springs Mountain has had a fire lookout tower which has been modified over the decades, a popular destination of hikers in Warner Springs. 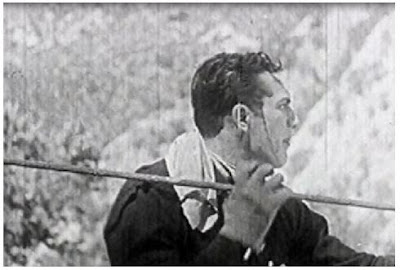 Lost Valley is prominent in “The Texas Tornado” in a number of scenes: where a simulated cliff dwelling (not native, as the Cupeño built and lived in adobe homes on the land) is shown as the hideout for Latimer’s henchmen and their holding of Frankie Darro captive, and the climactic rescue of Frankie by Tom when the gondola breaks, dangling from the cable between the mountains. When “The Texas Tornado” was filmed, the crew and cast were enthusiastic about making the movie in such a beautiful setting, with the non-stop action, fights, and suspense that took place. The fights were so rough and injurious to Tom Tyler’s legs due to Latimer and his henchmen wearing roweled spurs on their boots, that the spurs had to be banned from further film productions. The good news is, Tom was in tip-top shape in 1928 when this silent film was made, for he had won the Los Angeles Athletic Union weightlifting championship, which allowed him to climb over that cable with Frankie clinging on to him for dear life. The one spectacular stunt missing from the existing DVD of “The Texas Tornado” is a fight between Tom and Jack Anthony at the top of a burning oil derrick, resulting in Tom’s escaping by use of a guy wire, again with Frankie hanging on for safety.

For those who exhibit interest in visiting film location sets, Warner Springs is a destination for Tom Tyler fans, as Lone Pine Studios is, to experience walking upon the land where Tom made one of his surviving silent films.