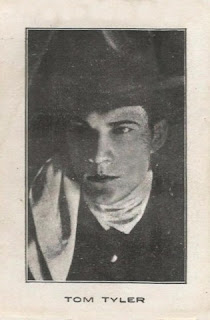 One of the more challenging movie cards to find with Tom Tyler on it is the Cine La Alicantina set which was manufactured in Seville, Spain, during the 1920’s and 1930’s. Very little information is known about this particular set, as Cine La Alicantina is not listed in The Movie Card site’s extensive (and always growing) directory. Printed on a paper-thin cardstock, each movie card measured 2 ¾” x 4” in size. The Cine La Alicantina movie card set is printed in black and white, and there are at least 100 cards in the set. The front of each card bears a popular image of the star, while the reverse side has the card number at the bottom, and the following at the top:

Si quiere usted admirar mi trabajo no deje de venir mañana
(If you want to admire my work, do not stop coming tomorrow) 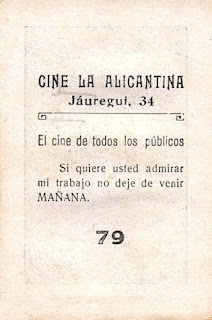 These lines, loosely translated, were meant to encourage the collector of favorite cards to continue patronizing the cinema. The most notable word here is “Jáuregui”, which is Basque for “palace” or “Manor House” - in this case, “movie palace” is implied. Tom Tyler appears on card number 79. Other popular film stars that appeared in the Cine La Alicantina set include Dolores del Rio, Fay Wray, Florence Vidor, Jose Nieto, Milton Sills, Jack Holt, and many others.

Posted by TriggerTom at 5:29 PM