Lost in translation: How “Tyrant of Red Gulch” became “The Sorcerer” across the pond

A number of blog articles here have explored the subject of Tom Tyler film titles and translations into other languages: Spanish, French, German, Polish, and Dutch. What has not been explored, are Tom's western films released under different titles in other English-majority speaking nations, such as the United Kingdom. Indeed, it would seem unusual for one of Tom's B-westerns to be released under a much different title, but that is what happened to his silent film “Tyrant of Red Gulch” (1928); across the pond, it was released as “The Sorcerer”. This title seems to be peculiar at first glance; by itself without any mention of who stars in it, suggests a non-western, perhaps something that might bring to mind a scene or two from “Jack the Giant Killer” (1962) or“Seventh Voyage of Sinbad” (1958), which have sorcerers in them. Tom Tyler however is not like Torin Thatcher 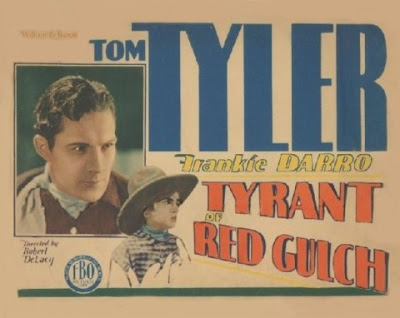 in these films which are best known for their Claymation special effects and fantasy themes. What should be mentioned about “The Sorcerer” is this particular title aligns closely with the original title for “Tyrant of Red Gulch”, which was “Valley of Superstition”. In Spain, the movie was released as “El Valle del Misterio”. Another interesting note about “The Sorcerer” is the following: it is listed in Tom Tyler's filmography in the 2003 comic book, Tom Tyler Tales by Calvin Castine, Sid Couchey, and Art Monaco but not as an alternative title to “Tyrant of Red Gulch”.

Like other movies which undergo a title release change, the first thing that is looked at is the plot. In “Tyrant of Red Gulch”, the story takes

place in the foothills of the Rockies, with Tom as the itinerant cowboy in search of a friend who meets up with a young lady named Mitza (Josephine Borio), and her brother, Tip (Frankie Darro). The actual tyrant of the region is named Ivan Petrovitch (Harry Woods), and Tom first encounters this foreigner when he catches the man beating a small boy, rescues the child then pummels Ivan. Ivan acknowledges to having met his physical match, and invites Tom with Tip and Mitza for a horseback ride through the mountains. Tom however gets ambushed, is separated from his new friends and must rescue them after they are taken in by Ivan and his henchman, Boris Kosloff (Serge Temoff). Held prisoner in a cave in the mountains, Tom manages to free himself, and risks his life in order to set his friends free, including the one he originally set out to look for. In addition to that, Tom also discovers the gold mine that Ivan was hoarding, and returns the stolen wealth to the small community. As “The Sorcerer”, Ivan is a diabolical terror, sinister, and very manipulative, leading our hero into an unexpected trap from which lies an uncertain escape.

There are a few interesting factors that come into play here: the heavy has an obvious Russian sounding name, while two members of the cast were foreign born: Josephine Borio was born in Turin, Italy, and Serge (Sergei) Temoff was born in Harbin, Heilongjiang province, China. A cinema ad from Palladium Item, Richmond, IN, September 6, 1929 provides the tagline for “Tyrant of Red Gulch”, "A story of a mysterious terror - of unseen death and unerring vengeance". While Ivan appears to have the upper hand in the story, Tom and Frankie have just as many tricks up their sleeve in order to counter the forces they are up against. Magic themes aside, the battle between good and evil continues in this western mystery, whether it is known as “Valley of Superstition”, “Tyrant of Red Gulch” - or “The Sorcerer.” 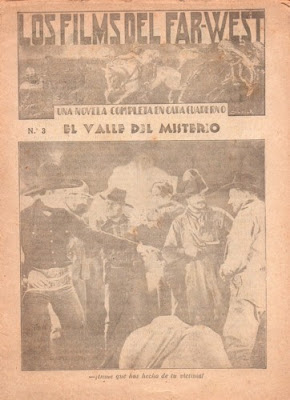 Posted by TriggerTom at 5:50 PM